Tommy Fleetwood was asked about Bryson DeChambeau after the American was forced to withdraw from the Saudi International due to injuries to his hip and wrist. 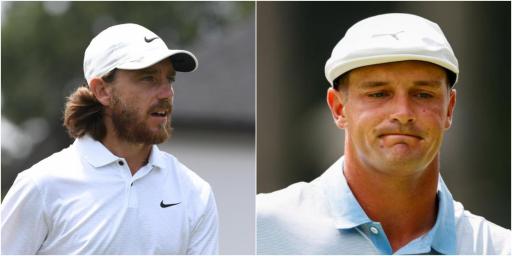 Tommy Fleetwood "hopes" Bryson DeChambeau is fine after the American had to withdraw from the Saudi International injured.

DeChambeau was struggling with his hip and wrist and was visibly wincing over many shots at the Farmers Insurance Open on the PGA Tour a week ago.

It led to speculation about whether DeChambeau, 28, would be able to play in Jeddah. He did, but was forced to withdraw ahead of the second round.

DeChambeau was playing alongside Fleetwood and Lee Westwood, who has confirmed he has signed an NDA over a proposed Super Golf League.

Fleetwood opened up his tournament with solid rounds of 66 and 67 at the Royal Greens Golf & Country Club to put himself in contention.

DeChambeau's withdrawal meant Fleetwood played in a two-ball with Westwood. He was asked if that affected his focus.

Fleetwood replied: "No, I mean, I was playing with Lee. I get on great with him. I guess in a way with the way the wind was, it was easier and a bit of an advantage for us that we could take our time.

"Never really got in a position where we had to rush. So I think that actually played to our advantage a little bit today.

"I hope Bryson is fine. I hope he gets back from his injury, and we'll see.

"But for today I think - yeah, playing in a two-ball with someone you get on really, really well and you're close to, it's a good thing, I suppose."

Fleetwood also suggested he is currently not happy with his putting, but feels like he is striking the ball well.

Playing in these conditions, he said, puts higher emphasis on club face control.

He said: "I'm working on the right things. Got a good structure, good simple structure. Focusing on a couple of key areas, trying to drive it better, and at the moment just trying to hit one shot off the tee and put it in play more and give myself a chance to play from the fairways a lot more. And doing that really, being focused on it.

"I'm not putting as well as I would like. I would really like my putting to sharpen up. But the more good rounds you put together, the more you sort of move yourself up, the more confidence you build and you keep going from there, and that's all you can do."