Viktor Hovland after T2 at Bay Hill: "This one stings... I should have won"

Viktor Hovland left frustrated and disappointed by his weekend performance at the Arnold Palmer Invitational. 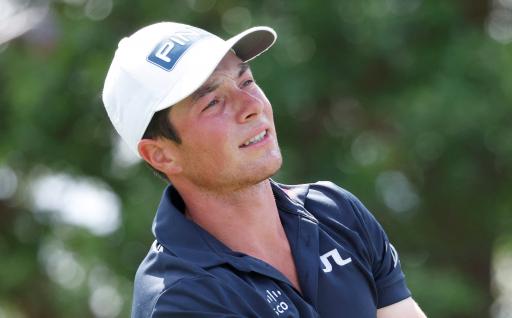 Viktor Hovland has revealed it "stings" after coming agonisingly close to winning a fourth title in his last eight starts at the Arnold Palmer Invitational at Bay Hill.

Hovland, 24, had at one point on Saturday afternoon opened up a four-shot lead in the tournament but he was quickly reeled in with a third-round 75 leaving him one shot behind Billy Horschel and Talor Gooch heading into the final round.

Watch: Norwegian commentators go BONKERS as Viktor Hovland holes out from the bunker

Despite nosing back in front of the chasing pack when making birdie at the par-4 11th, Hovland struggled to shut the door and was left to rue bogeys at 13, 15 and 17 en route to finishing one shot behind eventual winner and playing partner Scottie Scheffler.

"Obviously, I'm playing some great golf, but this one stings," said a disconsolate Hovland, who closed with a 74.

"My last couple of wins, I felt like it kind of came out of nowhere. This one was more like I felt like I should have won. Those sting a little bit."

Hovland's incredible run of recent results started back when defending in Mayakoba in early November 2021, before winning again in his next start at the Hero World Challenge presented by Tiger Woods.

He finished tied 30th at the Tournament of Champions in Hawaii to start the year and then followed it up with a tie for fourth on the DP World Tour at the Abu Dhabi HSBC Championship, two weeks before winning the Dubai Desert Classic for a third win in five starts when coming from six shots back at the start of the final round.

Hovland missed the cut at the WM Phoenix Open, admitting to tiredness, but then bounced back with a tied fourth at The Genesis Invitational hosted by Tiger Woods and a tied second at the Arnold Palmer Invitational on Sunday,.

One consolation for Hovland is that his tie for second bumps him up ahead of Patrick Cantlay to a career-best third in the Official World Golf Rankings.

Hovland also moves from 11th to sixth in the season-long FedEx Cup standings.

Next Page: Scottie Scheffler up to a career best fifth in the OWGR and he can now move to World No.1 with victory at The Players