This is how a junior Tiger Woods responded to being denied entry to clubhouses because of the colour of his skin. 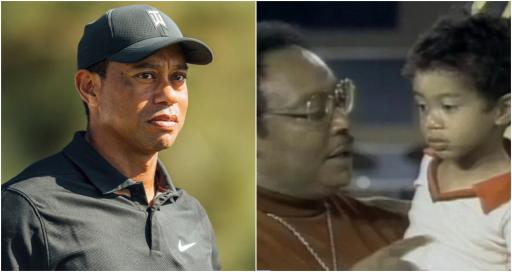 In Tiger Woods' 17-minute speech at the World Golf Hall of Fame, he focused on family.

It was remarkable that during his address where he absolutely held the room he did not mention once any of his wins.

Instead, he paid tribute to his parents Tida and Earl and the support of the network and the people around him.

He told stories of sneaking onto the Navy Course as a junior and how his father reacted when he was caught gambling.

When his father told him not to gamble at putting Woods returned a day later with a pocket full of dollar bills again.

A young Woods was again confronted by his father about gambling for money.

"I played some skins," Woods joked in the speech, which was the longest he had spoken in public uninterrupted.

More: Tiger shows off his bare, damaged leg without sleeve

When @TigerWoods was a kid, he'd win putting contests to win a pocket of quarters.

Woods, now 46, shared a story of when his dad found out. pic.twitter.com/YGJ5K5vDyl

Tiger Woods with an absolute quote when talking about being denied access to the clubhouse for tournaments when he was a kid.

“Fine. I’d put my shoes on in the parking lot and ask 2 questions. Where’s the 1st tee, and what’s the course record?”

Woods, of course, also paid tribute to the heroes and trailblazers before him. Of those, Charlie Sifford was one.

The late Sifford was the first African American to play on the PGA Tour. He died in February 2015.

Woods, 46, confirmed that his son was in fact named after him. He also talked about life as a junior golfer.

His parents took out a second mortgage on their home so he could play junior golf tournaments.

When Woods finally signed with Nike, the first thing he did was pay off that mortage.

There were occasions where he was refused entry to clubhouses as a teenager based purely on the colour of his skin.

A young Woods went to the car park and put on his golf shoes.

His response was then to ask two questions: "What is the course record?" and "Where if the first tee box"?

We all know what happened next.