Viktor Hovland moved up in the world rankings to a new record high while Patrick Cantlay's five month scoring record comes to an end. 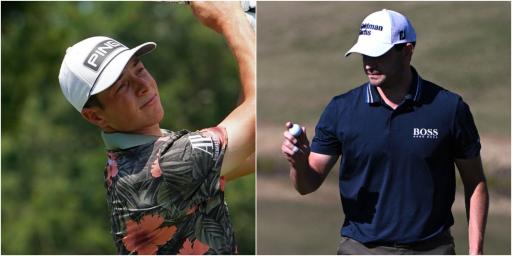 You get the feeling that no matter what happens in Viktor Hovland's career he will always be smiling.

An airline loses your clubs? A bit annoying, but still smiling. One of your fellow professionals snaps your driver? Not a problem.

Though it has to be said perhaps Thomas Pieters could thank his lucky stars Hovland had a few bad breaks and a few funny moments.

At Yas Links, Hovland was really in contention to win. But a catastrophic triple bogey put an end to his chances.

Hovland recovered, or at least attempted to with an eagle but in the end left himself just too much to do.

With his T3 finish, Hovland also got another reason to smile after he rose in the official rankings. He's now up to fifth for the very first time.

That's what back-to-back wins on the PGA Tour and good displays elsewhere will do for you. It begs the question, how far will he rise.

As things stand, only Dustin Johnson, Patrick Cantlay, Collin Morikawa and Jon Rahm are ranked better than him.

Will Viktor Hovland be the best player in the world one day?

The streak is over for Patty Ice

Let's be fair, that is quite an achievement for the reigning FedEx Cup champion.

It speaks volumes for his level of talent and just how consistent he has been.

What a ferocious competitor he has become. Now the 29-year-old is talked about as the man to beat.

That run, sadly, came to an end at The American Express on the PGA Tour when he signed for a Saturday 72.

Patrick Cantlay shot 72 today, ending his streak of 21 consecutive rounds in the 60s. It was the longest such streak on the PGA Tour since they started keeping track 40 years ago.