Despite a nervous finish, Aaron Jarvis won the Latin America Amateur Championship at the weekend to secure a place at The Masters and The Open Championship. 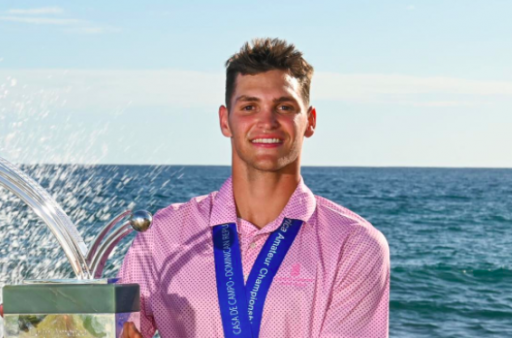 When you think of the greatest golfing nations in the world, it is safe to say that the Cayman Islands wouldn't come to mind. Aaron Jarvis wants to change this.

The 19-year-old achieved an incredible thing for both himself, his family and his homeland by winning the Latin America Amateur Championship at the weekend.

Jarvis had one more group to play behind him at the Teeth of the Dog course at Casa de Campo in the Dominican Republic. There were two players who could've spoiled his day.

Vicente Marzilio of Argentina needed to eagle the par-5 18th hole to reach Jarvis' mark of 7-under-par. His approach to the green looked short, but a fortunate bounce off a sprinkler head took his ball to seven feet from the pin.

Fred Biondi of Brazil also had a chance. An eagle would've won the championship for him. Despite a good drive, Biondi failed to even make a birdie.

Marzilio stood over his putt, but it rolled around the lip of the hole. Jarvis had won and he was jumped on by his friends and family.

"It hit a sprinkler or something and bounced straight up in the air, and I was like 'oh my god', I just couldn't believe that happened. Just a crazy ending," said Jarvis.

"It's crazy, representing the Cayman Islands. I'd like to keep doing it, get more players involved, be an inspiration by playing in The Masters and the British Open. It's special."

There are reportedly only two golf courses in the Cayman Islands and only one of them has 18 holes. This did not stop Jarvis from being hooked from a young age.

He won the boys 15-and-under title at the 2018 Caribbean Junior Individual Championship and the 2019 Cayman Islands junior title. He moved to Florida for high school and he trained at the David Leadbetter Golf Academy.

"With the college experience under my belt, I knew I had a chance. I had the mindset that I was good as anyone out there. I came out and gave myself an opportunity to win, and I did it," said Jarvis who is currently a freshman at the University of Nevada in Las Vegas.

He has now booked his place at The Masters and he will become the first-ever player from the Cayman Islands to compete at Augusta. He has also qualified for the 150th Open Championship.

NEXT PAGE: MEET SADOM KAEWKANJANA: THE MOST IN-FORM GOLFER IN THE WORLD