DeChambeau works with Proteus Motion on increasing his power and acceleration in the golf swing ahead of tackling the PGA Tour's FedEx Cup Playoffs. 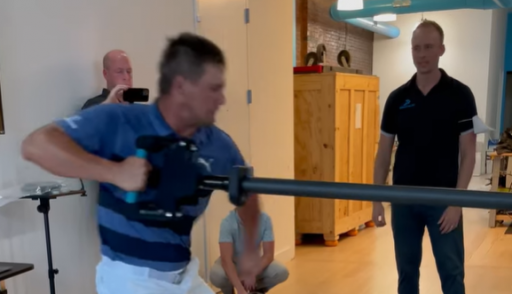 Bryson DeChambeau has been spotted getting to grips with Proteus Motion's smart 3D Resistance Training System ahead of tackling the PGA Tour's FedEx Cup Playoffs that start this week at the Northern Trust.

DeChambeau, who lies seventh in the season-long standings heading into this week's first Playoffs event at Liberty National, unsurprisingly still finds himself out in front when it comes to PGA Tour Driving Distance this season.

While we all know the 2020 US Open champion can bash balls over 400 yards when he requires, as proven multiple times on the circuit this season, DeChambeau averages 321.5 yards off the tee.

Incredibly, DeChambeau's average ball speed stands at 190mph, with his clubhead speed at more than 130 mph - some way ahead of anyone else on the PGA Tour right now.

Despite losing some weight and admitting to not quite feeling himself after testing positive for Covid ahead of the Olympics last month, it would appear the big-hitting American is looking to get his speed numbers back up again ahead of one final push from now until the end of the PGA Tour season in three weeks time.

Check out the video clip below as DeChambeau works on improving his power and acceleration in the golf swing with Proteus Motion:

Proteus combines patented hardware and software into the first-ever resistance training system capable of measuring strength in 3D, just like we move in real life.

According to the brand, training with Proteus is twice as effective as cable machines and free weights, with virtually no soreness.

"Our patented 3D resistance is multi-planar – it remains consistent throughout the range of any sports motion," reads a statement on the Proteus Motion website.

"3D resistance prompts athletes to perform movements in a way that distributes the load evenly through the body, allowing them to feel the movement more precisely.

"This awareness enhances ground-up sequencing and force production, which are essential for improving performance."

For more information about Proteus Motion, please visit their website.