WATCH: Jordan Spieth gets up and down in ridiculous fashion after WILD tee shot

Jordan Spieth got up and down in remarkable fashion during his match against Justin Rose at the WGC Match Play. 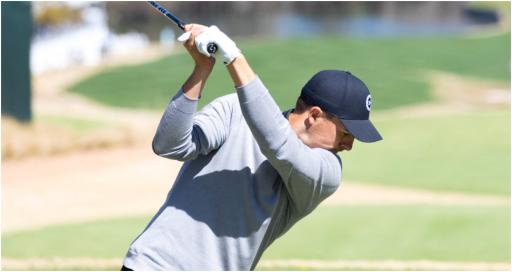 Spieth is an absolute artist at times. It's getting to the point now where it's hard to rank his best up and downs.

It's simply a matter of opinion and we all just sit back and enjoy some of his spectacular golf.

This time Spieth's superb up and down came during his second match at the 2022 WGC Match Play against England's Justin Rose.

Spieth, playing the par-3 11th at Austin Country Club, hit his tee shot miles left. It was so far left he was on a different tee box.

You know the drill, time to get the camera phones out and watch Spieth do what he does best.

Spieth clipped his chip pretty nicely and the ball landed in the bank and shot tracker informed us he had 29ft to save his par.

That is a Jordan three all day long, said Sky Sports' Nick Dougherty. There is 0.0 chance he misses that, added Rich Beem.

"I can't believe he has just done that."

Spieth halved the hole but would go on to lose the match 3&2.

Across the pond, the American comms knew what was coming. "You're just not all that surprised are ya? Because it's Jordan Spieth."

This is a disaster... I mean he is 40 yards past the green