PGA Tour pro Mackenzie Hughes decided to let a junior golf fan inside the ropes during the pro-am to take a shot at Muirfield. 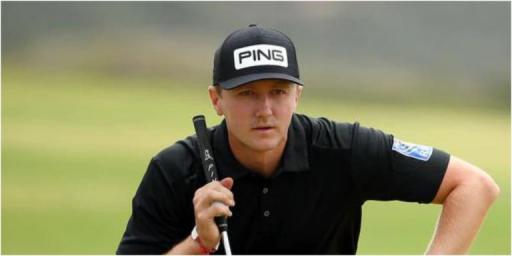 PGA Tour pro Mackenzie Hughes was faced with a tricky shot during the Pro-Am at Muirfield Village ahead of the Memorial.

Faced with the unnvering site of a green surrounded by water and with thick rough to try and navigate, the shot was not exactly easy.

So instead of trying to take the shot on himself - despite being PGA Tour winner - Hughes decided to let someone else take the shot.

That person? A little golf fan was allowed inside the ropes. And he hit a great shot. Watch below as he hits a beauty at Jack's place.

He takes a practice swing and then without hesitation steps straight in and executes it to perfection in front of the crowd.

The budding young golfer even got a round of applause and fist bump from the Canadian PGA Tour pro.

After giving him some well deserved knuckles, the young boy calmly hands the wedge back to Hughes and steps back outside the ropes.

Credit to the young chap, he handled his moment in the spotlight brilliantly. Perhaps we have a future star on our hands?!

Hughes has been playing on the PGA Tour since 2012. His lone victory came at the 2016 RSM Classic.

He's been in the headlines a few times this season. At Torrey Pines, he was hit with a penalty after accidentally playing the wrong golf ball.

Hughes thought he was playing his own but it turns out a marshall identified someone else's. Yikes.

He also laughed off a memorable shank at the Masters. The pro laid up at No. 15 at Augusta National then sent a hosel rocket into the crowd.

This year the 2022 Memorial boasts a prize purse of $12million, with the eventual winner earning north of $2million.