Collin Morikawa is considered the best ball striker on the PGA Tour - but that was not the case on the par-5 11th in round one at The Players. 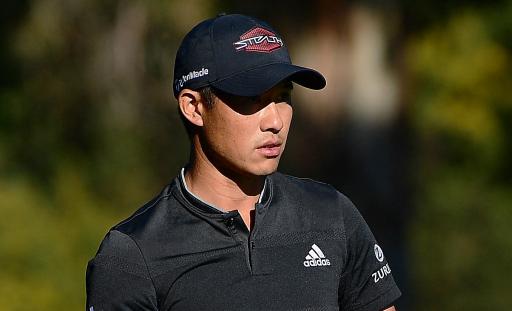 Collin Morikawa might be renowned as being the best ball striker on the PGA Tour in 2022, but you certainly would not have thought that when the two-time major champion played his second shot at the par-5 11th in round one at The Players Championship.

Morikawa only managed to play three holes of his first round on Thursday due to inclement weather at TPC Sawgrass, and he returned bright and early to continue his opening round on Friday morning.

Related: Tommy Fleetwood on what Collin Morikawa said to him: "That was harsh"

With rain lashing down by the time Morikawa reached the 11th hole, he sent a drive 334 yards down the right half of the fairway to set up a chance of reaching the green in two.

It was a tough shot given the conditions, especially with water lurking down the right flank next to a giant bunker guarding the front and right of the green.

"He's 231 yards out, he's got a chance to reach but he will need all of his best from here given the conditions," said Sky Sports Golf's on-course commentator Wayne 'Radar' Riley.

Unfortunately for Morikawa, he got nowhere near the dancefloor as he hit a stone-cold top - something we have never seen Morikawa do since he has burst onto the PGA Tour scene in recent years.

One of us: Collin Morikawa does this from the fairway
Not one of us: Still makes par pic.twitter.com/l7lqDG9vw1

Collin Morikawa is perhaps the world’s best ball-striker right now. He just cold-topped one and has finished multiple swings one-handed so far this morning, just in case you were still wondering whether golf is hard.

As you can imagine, he was left a little red-faced.

The ball ran along the ground some 100 yards into the rough in front of him, but he would he would recover well when draining a 15-footer for par.

Morikawa lies at level par for the first round thru 15 holes, with rain once again forcing a suspension to the tournament.

It is expected that The Players will run into a Monday finish given the forecast conditions over the weekend.

Much will depend how much golf they are able to play on Saturday.

You have to go back 21 events on the PGA Tour since the last Monday finish on the circuit, coming at The Northern Trust in August.

Next Page: PGA Tour pro regrets his Saudi comments: "I should not have said that"