Viktor Hovland and Rory McIlroy both had disappointing moving days at the Arnold Palmer Invitational on the PGA Tour. 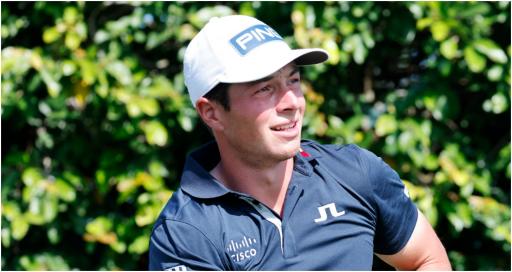 At one stage during the third round of the Arnold Palmer Invitational on the PGA Tour, Viktor Hovland had a four-shot lead.

By the time he stepped off the 18th green at Bay Hill, he found himself trailing Talor Gooch and Billy Horschel by one shot.

The Norwegian's ascension to the top of the golf world rankings is still well and truly on. The victory here can still be achieved.

He can move to number two in the world with another win. But four bogeys on his back nine will sting more than a bit.

What faces him is a Sunday battle on a brutal golf course where he will have to earn the win, instead of strolling towards it.

Hovland eventually signed for a third round 3-over par 75 after opening up with rounds of 69 and 66 in Florida.

Hovland will not be battling it out with Rory McIlroy on Sunday in the final group.

A 4-over 76 for the Northern Irishman was not what he needed.

McIlroy dropped two shots on the front nine as he struggled to get anything going. By the time he finished he looked weary-eyed.

The 32-year-old's woes were compounded when he set an errant tee shot wayward at 14. It was so far off line. That led to a double bogey.

By the time he handed in his card it featured five bogeys and a double bogey. Three birdies mixed in limited the damage somewhat.

Before the third round he told the media that cardigan was nestled away safely in his closet. Perhaps he will spend the night sleeping in it.

The Englishman threatened to go nuclear at times. His front nine featured five bogeys. His back nine wasn't as bad, but it wasn't good.

Hatton, who has played in two Ryder Cups, signed for a 6-over par 78. That was after going 69-68. There was some choice language.

He's not out of it by any stretch of the imagination. But he, like McIlroy, will need to go considerably low on Sunday.

Elsewhere at Bay Hill, Matt Jones showed us one of the best hissy fits we have seen for some time when he launched his putter into a lake.

Max Homa made his first ever hole-in-one and Rory Sabbatini withdrew but then refused to leave.

Scottie Scheffler and Gary Woodland also forced their way into contention. It will be a thrilling finale, no doubt.

Next page: Matt Jones two-arm lobs his putter into a lake at API