Lee Westwood needs your help to borrow one of Ian Poulter's most memorable outfits to wear on the PGA Tour. 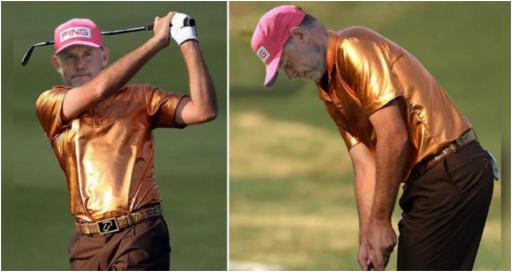 Perhaps keep the date in mind, but Lee Westwood wants to borrow one of Ian Poulter's most memorable outfits.

As you may know, Poulter is known for his chest beating theatrics helping Ryder Cup Europe deliver emotional victories.

But when he's not doing that he likes to entertain us with some colourful, interesting and eyebrow-raising outfits on the golf course.

It was in 2008 when Poulter wore perhaps...the most interesting outfit we've ever seen him wear?!

The eccentric golfer was number 22 in the official world golf rankings. He had also drawn some attention after comparing himself to Tiger Woods.

"Don't get me wrong," he bragged back then. "I respect everyone who is a professional. But the problem is I know I haven't played to my full potential yet.

"And when that happens, it will just be me and Tiger."

10k likes and @IanJamesPoulter will let me borrow his outfit for todays round pic.twitter.com/eSc8t1hCbF

Posh hoarder has its pluses sometimes… not sure this is one of them pic.twitter.com/OYOe3jcypg

Poulter later pointed out that perhaps if people read his full interview containing those remarks they would have understood that more.

You would think that after comparing yourself to Woods you might keep your head down, but not Poults.

He turned up to his next tournament in India wearing a tight-fitting gold lamé shirt and brown trousers with orange etchings.

That stunt saw some golf fans point out that he looked more like a jaffa cake than a professional golfer.

Poulter found the outfit last July, entertaining his followers with a rendition of Night Fever by The Bee Gees.

Now Westwood wants to borrow it and wear it during The Valero Texas Open at TPC San Antonio on the PGA Tour.

Keep in mind the date, though. It's April 1.