Jason Day has withdrawn from the Wyndham Championship on the PGA Tour after only 18 holes at Sedgefield Country Club in North Carolina. 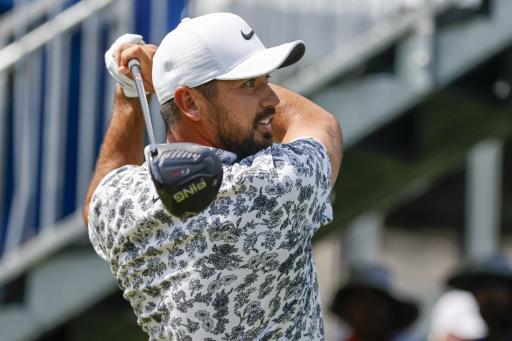 Jason Day was forced to withdraw from the Wyndham Championship on the PGA Tour after only 18 holes due to a bout of illness.

The official communications team of the PGA Tour confirmed his withdrawal on social media.

Day will undoubtedly be frustrated at having to leave the tournament early because he had made a good start to the championship.

The 34-year-old, who has won 12 times on the PGA Tour, hit 14 out of 18 greens in regulation in the first round at Sedgefield Country Club in Greensboro, North Carolina, on his way to an opening round of 3-under.

It left him T-23 on day one. John Huh shot an opening round of 9-under par whilst Sungjae Im was only two strokes further adrift.

Day's round also included a 418-yard drive on his opening hole of the day. He only had to flick a wedge in from 112 yards before setting up an easy opening birdie.

Jason Day (illness) is a WD prior to round two at the Wyndham Championship.

The Australian's struggles on and off the golf course have been well documented in recent times.

Day's last victory came in 2018, at the Farmers Insurance Open. He is now ranked 140th in the Official World Golf Ranking.

In March, he opened up on the passing of his mother Adenal "Denning" Day. She was 65.

He's also struggled with back problems. That led to him going on a stretch of missing 14 cuts in 36 starts.

It's been a mixed bag in 2022 for Day. He's missed five cuts from 18 events played. His best finish was a T-3 at Farmers Insurance Open where he played this incredible shot in the final round.

He finished T-55 at the PGA Championship. He is currently ranked 115th in the FedEx Cup standings.

Here's the payout info for the Wyndham Championship.

Next page: Joel Dahmen is absolutely furious with the LIV Golf players