It may not have been Xander Schauffele's week at the ZOZO Championship, but he loved playing in front of his family in Japan. 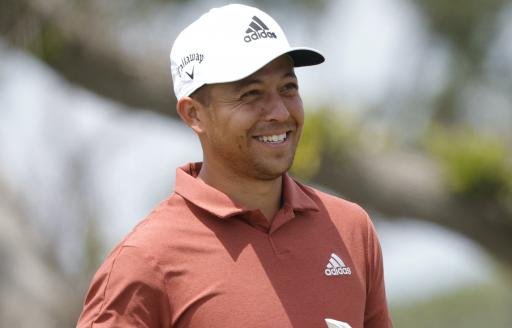 As Xander Schauffele's grandparents live in Japan, it is very hard for them to watch their grandson play on the PGA Tour, especially in the current pandemic climate.

The World No. 5 finished in a tie for 28th place on level-par at Narashino Country Club. It wasn't the week he wanted, but in many ways, it was one of his most memorable weeks on tour.

His grandparents finally had the opportunity to come and spectate their grandson at the ZOZO Championship, and Schauffele described this as a shining moment of his week.

"I enjoyed being here despite the lockdown and Covid-19 rules. It was just nice to have my family here which was really cool," Schauffele said after his final round on Sunday.

"I don't get a big opportunity to see them since they don't travel to the US very much, that was the shining moment for me.

"I saw both of them on the course (grandparents), it was nice to see my Grandpa, he was waving like a crazy man on one of the holes! Everyone was standing still and he was waving so it was good to see him out and walking around."

Schauffele's family must feel immense pride at having a family member to not only play on the PGA Tour, but to be one of the best players on the planet.

The 27-year-old has now made two appearances on the new PGA Tour season. He finished tied 18th last week at the CJ Cup in Las Vegas.

RELATED: HIDEKI MATSUYAMA: WHAT'S IN THE BAG OF THE ZOZO CHAMPIONSHIP WINNER?

Schauffele may be an Olympic gold medallist, but he has been on the podium without winning so many times on the PGA Tour.

He has four victories to his name, however, he finished second three times last season. He will be hoping to convert more of these runner-up finishes in the new season.

NEXT PAGE: COLLIN MORIKAWA DID SOMETHING HE HAS NEVER DONE BEFORE AT THE ZOZO CHAMPIONSHIP