Hyperbolic face technology with radical new shape and oversize sweet spot. Features Edge technology for confidence-inspiring look with Draw and Neutral models. Draw shape stretches the body towards the heel while the Neutral shape concentrates the centre of gravity closer to the centre line of the club to make shaping shots easier. Lofts: 8, 9, 10, 11 and 13 degrees. 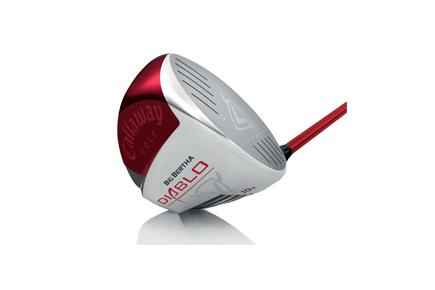 Being neither long nor straight is not an ideal trait for a golfer, but for those with such afflictions, the Big Bertha Diablo represents a chance to change all that.

Ever since the first Big Bertha driver burst onto the scene in a blaze of publicity in the early 1990s, the brand has been all about distance and forgiveness.

That sort of combination was quite a rare commodity back then, with the small-headed drivers of the time requiring a very precise hit to extract maximum yardage.

Big Bertha - there was even a Biggest Big Bertha - undoubtedly changed the landscape of the golf equipment, and although that original driver was no bigger than a modern 3-wood, at the time it felt, sounded and looked very different. The same can be said about the 2009 incarnation of Big Bertha.

The new Big Bertha Diablo, part of a range that features fairway woods, hybrids and irons (aimed at the better player), is a fairly radical product from Callaway. The all-titanium head is constructed from four separate pieces of metal - a face, a sole, a crown and a rear weight - to allow engineers to move the weight to the perimeter of the club.

It sounds obvious enough, and we all know that weighting the edges of the club makes it more forgiving, but to really take it to the next level, the shape of the head has also been significantly altered to increase stability and optimise the centre of gravity.

What that actually means is: when you don't hit the middle of the face or you cut across the ball slightly or when the contact is less than perfect, the damaging results of these common faults will be greatly reduced and the ball flight will still be strong.

That's the theory but does it work in practice?

The answer is a resounding yes! The Diablo is one of the most forgiving and easy-to-hit drivers ever made. The pronounced curve of the jet black head with its blood-red edges takes some getting used to as does the face which is a tad closed (particularly on the Draw-bias version). But as soon as clubhead makes contact with ball, any doubts are immediately banished.

Even shots struck with less than average precision still gain some good yardage.

Unusual head shape aside, it also looks pretty impressive, with the black and red decals perfectly complementing the red shaft. At less than £200, its cheaper than several of its rivals and performs significantly better than most.