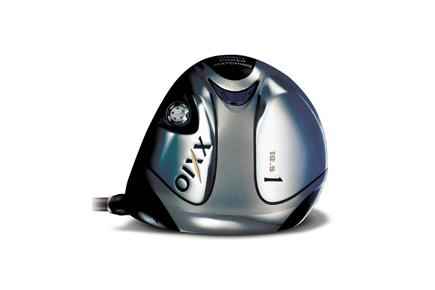 A colossally powerful driver, the XX10 is a superb club that will surprise a lot of people

With the astute signings of a number of high-profile Tour players like Jim Furyk and Henrik Stenson, the recent acquisition of Cleveland Golf and an ever increasing share of the golf ball market, the outlook for Srixon is clearly bright.

But it's not just balls where this company is making a name for itself, its clubs have always operated beneath the mainstream radar, performing strongly without feeling the need to shout about it. One exception, however, that's brash, loud and built for fun is the 2009 Srixon XX10 driver.

Other manufacturers might try to straighten us out with adjustable weights, adjustable face angle and adjustable loft but at the expense of valuable yardage. But the good news for fans of the latest Srixon XX10 driver (pronounced Zek-See-Oh) is that this particular club remains unashamedly dedicated to the pursuit of distance.

And is doesn't care who knows it. The latest incarnation of the Srixon XX10 is just about the longest the company has ever produced - longer even than the original hot-faced (and now non-conforming) version - a clear indication of how far technology has come in the last five years.

As a previous owner of several XX10 drivers, I can vouch for its capacity for 'bombing'. The ball flight is not as high as some other drivers, but it fires a golf ball like a bullet and plenty of run certainly helps when you don't get all of it off the clubface. But where once it was a little wild, careful engineering has helped to eliminate those epic raids into unseen areas of the golf course. That means paying close attention to the bulge and roll radius of the face and adding weight to the heel to help counteract the dreaded slice.

Welcome as that aspect of the design might be, though, people don't buy the Srixon XX10 if their natural instinct is the safe option. They want a driver to go long, and to that end it delivers. A whopping 45.75 inch shaft generates the clubhead speed needed for monster drives while an ultra-light and explosive face pings the ball into the stratosphere with amazing ease.

The Srixon XX10's other trick is the combination of impossibly thin crown (just .45mm) and lower centre of gravity which together produce a higher launch angle with less spin. That, as we are constantly reminded by manufacturers, is the secret of long drives.

The XX10 not only booms out big drives but also sounds fantastic too, generating a satisfying crack that really does let the golfer (and everyone else around) know that a potentially a whopper has just been unleashed. The head shape is typical Srixon, with a slightly elongated rear end and pronounced nose giving the driver an almost triangular feel. and while the sparkly blue tint on the crown is another aspect that might not suit everyone, I personally welcome a slight departure from the Henry Ford school of black clubheads.

A colossally powerful driver, the XX10 is a superb club that will surprise a lot of people. It's long, forgiving on less-than-perfect strikes and remarkably good at keeping the ball in play. Of course, that's the least you'd expect from a £300 driver, but if you value being the longest in your fourball it's a serious contender for your cash.