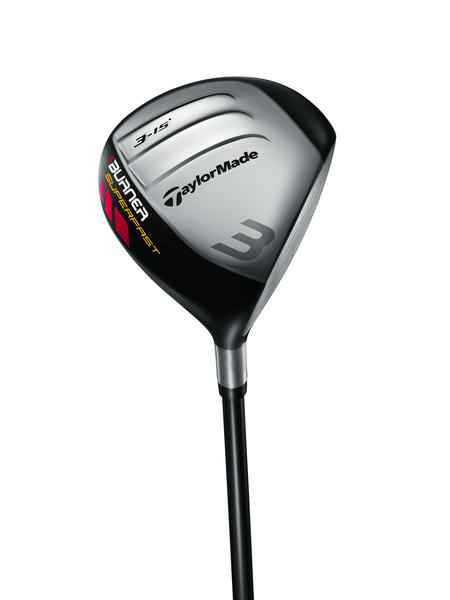 A powerful club that is more driver replacement than fairway wood. Quite difficult to hit off the deck, but impressive when struck from a tee.

A longer than ‘standard’ shaft, over 43 inches, and a chunky head with a sizeable hitting area makes this Burner 3-wood a big hit off the tee.

As a replacement for your driver then, this fits the bill nicely, delivering plenty of power and a good launch with considerable hang time for a 3-wood.

Swingweight is right up there at D8, compared to the norm of about D2 or D3, which again serves to give the club a real punch factor when looking for length from the tee.

There’s a nice finish to this club with a honeycomb effect over the top of the head, a red flame to mark the sweetspot and a thin red line around the back. It’s a club that is beautifully finished and exudes quality.

With a head depth, from front to back, of close to three and a half inches, there’s plenty of body to see at address and give the feeling of once the ball is hit, it’ll stay hit. If the face is slightly closed at address, it's only marginal and doesn’t affect the overall look.

The problems I have with it amount to versatility. Great off a tee peg, but not so easy to get along with when faced with a 230-yard plus approach shot from a tight fairway lie.

Testing this club for several days over a links course, I considered dropping the driver altogether and carrying a second, smaller, more compact 3-wood for use from the fairway. The Burner was long off the tee and would have been even more tempting with a little less loft, although that maybe defeats the purpose for those golfers who struggle to get the ball airborne.

Off the deck, the large head made the ball look quite small at address and gave the illusion that it was sitting down. It was all too easy to catch a strike off the bottom of the club, delivering a low runner with a touch of fade.

The irony in the design of this club is that it is aimed primarily at the middle to higher handicap range, with a number of features for ease of use, yet the extra long shaft makes it tough for the target market to perform with it consistently.

While many top pros shorten their drivers for added control, Sergio Garcia being one, manufacturers often add length for poorer players simply because they know that distance sells.

Another notable feature of this club is the choice of Winn grips, soft to the feel and pleasingly tacky. A word of warning here though because in my experience these grips rarely perform quite as well when damp. I found that once wet, there was a tendency for them to become slightly greasy which certainly undermines confidence.

A powerful club that is more driver replacement than fairway wood. Quite difficult to hit off the deck, but impressive when struck from a tee.