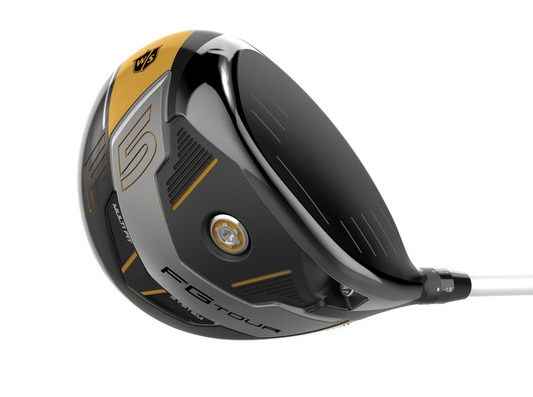 Wilson Staff builds quality clubs at a relatively affordable price point. The question is how much does quality suffer related to the lower price?

However, for the extra money, you are getting an A-grade driver. Is it worth shelling out extra cash? That depends on the consumer, and whether they want more performance from their big stick.

The Wilson Staff FG Tour F5 has a deep face, which should inspire confidence at address. It has an uncluttered aesthetic on the crown, while the sole lets you know there is some cutting-edge technology employed. The face is naturally quite lofted at address.

The feel was not up to the standard of the leading brands. It isn’t dead, but it has a quiet, understated feel - we would have liked more feedback.

In the distance and forgiveness stakes we were reeling off the superlatives. While it’s not the longest driver you’ll hit all year, it’s only a couple of yards behind, offering plenty of power.

An interchangeable weight is placed low and close to the face to lower spin rates, which were average for a driver. In terms of launch angle, it was a little higher than the median.

Reactive Face technology is employed, which varies the thickness of the face, and it seems to be paying dividends as we were getting a heap of help on off-centre hits.

In terms of workability it is middle of the pack, although there is a heap of adjustability built in. Three adjustable sole weights allow players to alter launch angles, ball speeds and spin, and there is also a six-way adjustable hosel covering lofts from eight to 12 degrees in half degree increments.

There’s also no need to remove the head from the shaft to alter the loft, thanks to Fast Fit Technology, which allows players to change the setting quickly and easily.

The best Wilson Staff driver to date. Distance and forgiveness equal to leading drivers in the market, but falls down in the feel stakes. Lots of adjustability to boot.

Head to the Wilson Staff website for more information.