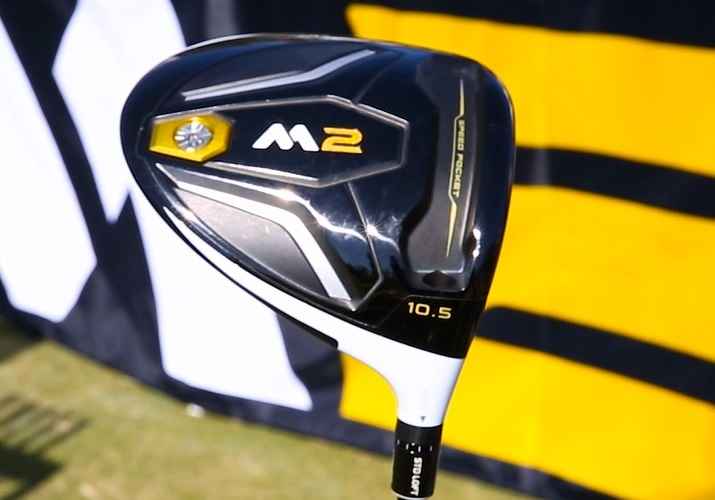 If you are looking for increased distance, added forgiveness and a £100 saving albeit sacrificing some gadgets, you will want to take a closer look at the new TaylorMade M2 driver.

By no means a cheap investment at £329, our testing of the M2 during TaylorMade's official press event during the PGA Show in Orlando earlier this month indicated an even hotter product than the more expensive M1 that was launched at the end of 2015.

TaylorMade engineers focused on three key performance features when it came to the M2 driver and that was to deliver ball speed protection on shots struck away from centre-face.

As a result, the company has packed inverted cone technology (ICT; increases the size of the high-COR area of the club face), a redesigned Speed Pocket (helps the face flex better at impact) and increased moment of inertia (resistance to twisting at impact) into this driver.

On first inspection, the black and white crown design is exactly the same as the M1, with the top of the crown is higher than the top of the face. We admired all of this last time around and we haven't changed our opinion.

The white side of the crown seems to fixate your eyes better to the ball and we feel the face and crown differentiation works well with the black face.

TaylorMade informs us its lightweight carbon composite crown weighs 12g less than a titanium crown, so this means the company can shift weight lower in the head and drop the centre of gravity (CG) 35% lower and 46% further back than before with the former AeroBurner driver - the product this one is replacing in the line.

Flipping the head over to look at the sole, and you unsurprisingly note a Speed Pocket, which helps the flex to face at impact. It's remarkable how many times TaylorMade can "revamp" a SP, but believe us, it has. The ball flies off the face and then some at impact.

While lacking the eye-catching T-Track system on the M1 - an asset that helps players fine tune their driving performance to best match their swing - players who opt for the M2 will still benefit from TaylorMade's 12-position loft sleeve that provides up to four degrees of loft adjustment.

Again, just as we experienced with the M1, the acoustics of the club is just superb.

This is arguably the sweetest sounding driver you will ever experience with its hot and crisp sound - far removed from the "tinny" noise of older models.

Its stock Fujikura Pro shaft also stood up to the test, aiding great energy into the back of the ball through to impact, but fear not if you find it doesn't work for you as TaylorMade is providing 23 additional premium custom shaft options at no upcharge.

The new M2 driver delivered us with scintillating distance and impressive forgiveness.

For us, it proved the longest driver currently on the market with 268 yards of average carry distance and 290 yards total distance - an approximate eight-yard gain against the majority of drivers we've hit this season.

Of the 20 drives we struck with a standard Fujikura Pro stiff shaft, only three veered more than 10 yards offline, proving this one has more than just firepower to excite.

The M1, which also received a five-star rating from us, is perfect for the tinkerer with all its gadgets in the sole, but we found the M2 packed more of a punch and was just as accurate.

By no means cheap at £329, we feel if you aren't too fussed about tinkering your driver to get involved with the M2. The £100 saving against the M1 could be better used to purchase a new product like a new TaylorMade putter or wedge.