One of the finest push trolleys on the market 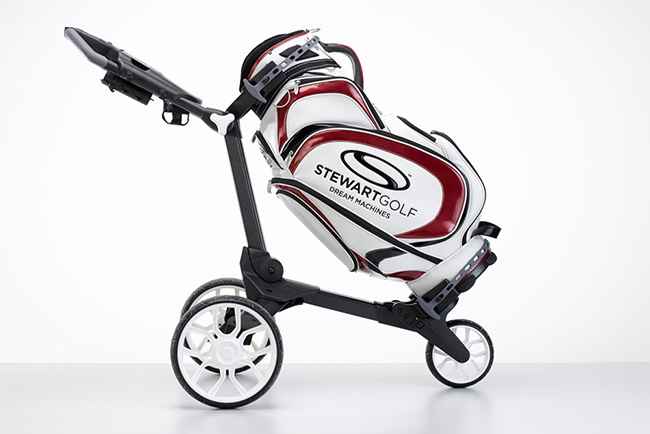 The British brand claim the R1 Push is the best push trolley in the world, and we

If you were to amble up to the weekly medal in a pair of John Daly’s finest, or bomb a 300 yard behemoth off the first with a new driver, you’d expect a few people to comment – you wouldn’t expect the same treatment for a push trolley.

It is a product that doesn’t often get shouted about, but in the case of the new Stewart Golf R1 Push trolley, it needs to be.

The British brand claims the push trolley is the best in the world, and we’d be hard pushed to find any evidence to the contrary.

The new Stewart Golf R1 Push trolley is the pinnacle of push technology. It’s wonderful to look at, is a delight to use, and comes with every bell and whistle you could think of.

As always, there are three key elements to take into account in a good quality push trolley: the size when collapsed, ease of folding and unfolding, and most importantly, on-course stability and performance. The R1 excels in all capacities.

The patented Rack & Pinion driven folding mechanism makes the R1 easy to open and fold back to its neat, compact state. Impressively, it’s a whopping 33% smaller than its predecessor, the Z3, despite a 40% increase in storage volume in the handle.

It takes a bit of practice to open the R1 as fluidly as the numerous demonstration videos suggest, but after a few attempts, it becomes nothing more than a flick of the wrist. When packing away, we’ve never had a trolley that’s easier to collapse and the Rack & Pinion mechanism also means expansive wheelbases are no longer a problem for anyone with limited boot space.

The adjustable and padded bag jaws will accept almost anything you throw at them and we couldn't find one that wouldn't fit. At 8.1 kg it is on the heavy side but its construction oozes stability and the weight only adds to its sturdy structure and overall performance.

Although not to everyone’s taste, the foot brake is more than ample, easy to access, and sufficient enough to hold the R1 on any incline we encountered.

At £199, it’s very much at the top end for a push trolley, but golfers should factor in that other trolley brands charge separately for accessories (the R1 comes with umbrella stand, ball holder, scorecard holder, ball marker, four accessory points, soft touch handle and bottle holder as standard).

The magnetic ball marker in particular is a deft touch that really epitomises the intricate attention to detail that goes in to every Stewart Golf product.

One slight functionality niggle is that if you’re on the tall side and require the handle height in a more vertical position, access to the drinks holder and storage compartment can be slightly hampered if you’re using a large bag. However, it’s quick and easy enough to lower back down for access.

Back in 2010 we described one of its earlier predecessors, the Z1, as the BMW of push trolleys. Well, if that was the case, this is the Aston Martin.