Callaway claims they are 'the longest stainless steel irons they have ever created' with a lower and deeper centre of gravity designed to make the sweet spot more accessible at lower impact locations. Variable face technology (VFT), a 360-degree undercut channel and modified Tru-Bore combine to maximize distance, feel and playability. 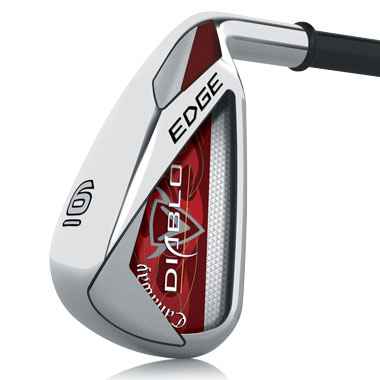 They are the easiest irons I

If you’re looking for clubs that make golf easier, irons that are forgiving on off-centre hits, irons that flight the ball high and straight time and time again, then you’d be foolish not to give these a try.

They are the easiest irons I’ve ever tried when it comes to finding the sweetspot and getting consistent results. These Diablo Edge are aimed at the mid to high handicapper and to that degree Callaway has hit the nail on the head.

As a past user of blades (or at least blade looks with a little hidden help), I found myself laughing as I sent another ball high and straight up the range. It was like striking the golf ball with a tennis racquet and it didn’t seem to matter how much I tried to vary my swing, a little flatter, a bit steeper, the performance of the club hardly changed.

Callaway had sent me the 3-, 6- and 8-iron to try and, despite being a traditionalist at heart, I found myself wondering if I could convince them to throw in the 4-, 5-, 7-, 9- and wedge to complete the set I'd be a happy bunny!

But surely there must be drawbacks, there always are? Well, if you take into account the market that these irons are aimed at, then I’d have to say that drawbacks are extremely hard to find.

I hope Callaway won’t be too offended if I say that they can be a company that doesn’t always get things right first time around. But these Diablo’s aren’t first issues. They’ve benefitted from a past line of heel and toe weighted models and now the mix is just right.

A traditionalist might look at the overall appearance and have a seizure, but in all honesty, the irons are beautifully finished both cosmetically and in their general design. They’ve even neatly capped the bore-through hosel at the bottom to stop the corrosion that affected previous versions.

In common with other game improving irons, the offset is quite pronounced and the wide sole plate stops the club from digging too deeply into softer ground. How they perform on hard pan surfaces might be an interesting point and one that wasn’t carried out in this analysis prior to the recent dry spell.

The clubs look quite chunky, but the top edge, while thick, is not too overly pronounced. The backside of the club does stick out a little on the 3-iron, but that’s something you can get used to.
Perhaps another drawbacks for the more accomplished player, might be that these irons are rather one dimensional. Fun, but only if you don’t mind hitting pretty much the same shot all the time. But that  is something most amateurs would benefit from.

Easy to hit, quality build, very consistent. These irons tick every box that has been put in front of them for the game improving golfer.