The Ci9 irons, says the company which provides irons and woods for Padraig Harrington, 'combines maximum playability with classic looks and workability.' Traditional mid-size head with a thinner top line and a moderately progressive offset. One-piece 'soft response insert' extends across the iron cavity to create more feel and a solid sound even from miss-hits. Modified U-grooves and higher centre of gravity delivers for a higher spin rate. Hidden rear cavity 'Exoskeleton' disperses weight mass to the heel and toe for improved stability at impact. Available with stock lightweight FST stepless steel shafts or Aldila VS ProtoByYou graphite shafts in 4-iron to PW sets priced at 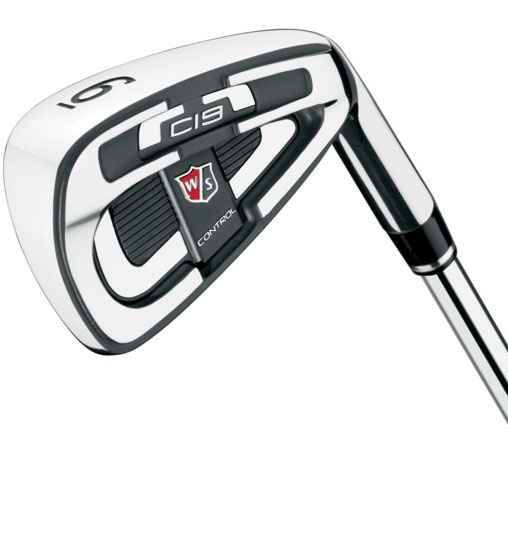 Immediately, the greatest improvement I made was when using the short irons which definitely gave me greater control with more backspin. They also gave me much greater length

It's that time of year when many golfers, inspired by watching the US Masters on TV and tempted by mouthwatering deals in their local golf store are stimulated to maybe invest in new irons.

Adverts in golf magazines, on Sky Sports golf coverage and, more emphatically, online further spark their imagination and a feeling that this is the year to take their game to the next level.

A golfing pal, Peter de Kremer, who's also a 6ft 4in javelin coach, has been looking to replace his trusty and rusty Ping Eye irons for something more 21st Century, so I suggested he also try these new weapons from Wilson Staff. And he gave me the finest endorsement any manufacturer could wish for - he's going to buy a set.

"Immediately, the greatest improvement I made was when using the short irons which definitely gave me greater control with more backspin. They also gave me much greater length.

"The wedge goes further than my old Ping 9-iron but with no sacrifice in height. If anything the ball flight is higher as well as further for each comparable club in the set."

Peter says he found an excellent blend of forgiveness and performance throughout the 4-SW set thanks to the clubs' large sweet spot.

"For short pitches of up to 50 yards were made easier by the forgiving nature of the lofted clubs. With my old clubs, a miss-hit would invariably result in a pull, but not with these Wilson Ci9s," he said.

"The longer clubs took me a few rounds to get used to in the set up as my Pings are offset, while these sit nicely and square on the ground and so easy to line up to my target. Now that I am used to them they feel superb off the clubface.

While the set Peter has been testing for feel, the standard length shafts are more suited to my 5ft 7in frame, so he appreciates that he'll need shafts at least an inch longer and with a more upright lie when he has them custom-fitter at his local Wilson dealer.

"The longer clubs (4- to 6-irons) should then become even easier to hit as I've had a tendency to slightly lift the heel of the club to compensate, so the toe is touching the ground through impact. This can open the face on occasion."

However, he more than happy with a regular steel shaft flex.

He says: "I see no reason to change to stiff stafts even though I much prefer them in my woods to avoid too soft and whippy a feel, particularly with the driver. With the Ci9 irons I'm getting a nice crisp feel at impact."

Peter warns that golfers should not be put off by the slightly cheaper prices Wilson Staff charges for these clubs.

"The Ci9s are top of the maker's range but I would certainly recommend them to any level of golfer. Indeed many of the irons I have tried over the last couple of months have been up to £200 per set more expensive but I did not find them any better for the extra expense.

He offered the only slight criticism would be that the chrome soles of the pitching wedge and sand wedge tended to lose lose their polished shine quite quickly due from use on drying ground and the slight sand blasting effect of bunkers but it didn't their performance and is probably no worse than any other sets of clubs.

After three weeks of intensive golf Peter reported: "Despite trying many models at different driving ranges, I had not been able to find anything which I felt were a good  an improvement on my old clubs - until now. It was a great help to have the loan of the Ci9 irons and I'll definitely be buying a set for myself."