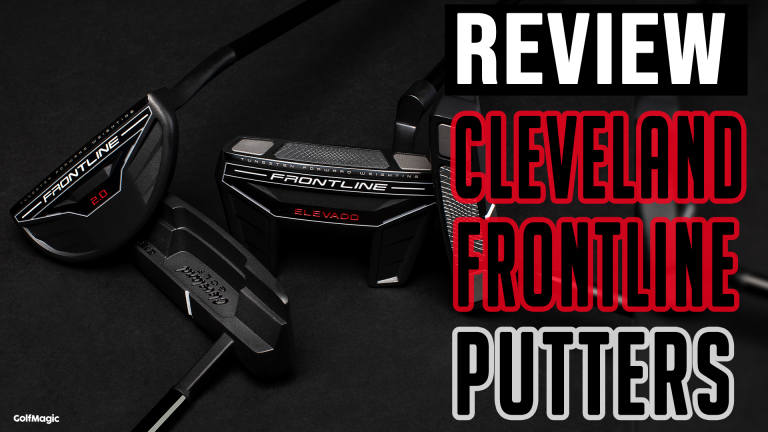 Cleveland's best putter line to date; dark finish instantly appeals over the ball; putts start on-line much better; distance control is superb
Standard grip might not be for everyone
Our score:
Overall:
4.5
PRICE: £159.00 YEAR: from 2021

Cleveland Golf might be best known for its world-class wedges, but its putter range is certainly catching up fast.

If you are in the market for a cracking value premium putter, then we suggest you put one of the six new Frontline putters at the front of mind with prices starting from £159 depending on your chosen style.

With putting very much being a personal preference, we selected the two models that fit our eyes most and landed on the Frontline 2.0 Flow Neck and Frontline Elevado Plumber's Neck.

The 2.0 is ideally suited for golfers with a strong putting arc, while the Elevado is better suited for those with a slight arc.

The darkened finish of the putters instantly appeal from the moment you address the ball, and the single line on top aids suitable alignment down your target line.

Now the key concept to understand with these new Cleveland putters is the centre of gravity has been shifted forwards in order to reduce the 'Gear Effect' on those miss-hits, which let's face it, is a common theme for most of us amateur golfers.

The shift in weight means your putts will start much straighter on your intended target line. At least that's what proved to be the case during a recent putting session of ours.

We then took 20 putts with both putters from 12 feet, and holed six with the Elevado and five with the 2.0.

Then on the long-distance putts from outside of 30 feet, we holed four with the Elevado and three with the 2.0.

While it was nice to see putts dropping from all over the place, the most pleasing aspect for us was the consistency of strike on each putt and the fact these putters do exactly what they claim by helping you out significantly on those squiffy hits.

The distance control on putts outside of 30 feet was particularly satisfying, with only two putts finishing outside of our three-foot circle around the hole.

Much of this is down to the putter's 'Speed Optimised Face Technology', which is the groove pattern on the Frontline's forged aluminium face that adds speed on off-centre strikes.

Quite simply, whether you hit out the middle or outside of the middle of the face, you will still get the same distance out of your putt.

"Having weight as close to the face surface as possible while maximising MOI, provides the straightest putts on mishits ever measured. Frontline technology has eliminated the mishits.

"No matter where you hit on the insert, the ball will go straight and the same distance. This line-up, with additional models and builds, provides all options for players to uniquely align at impact, delivering the face on the target line, while making the sweet spot ridiculously large."

Without question, the best putter line ever produced by Cleveland Golf.

Both the Elevado and 2.0 Frontline putters tick all the right boxes when it comes to looks and overall performance.

If you struggle to start your ball on-line then these putters are definitely ones you will want to seriously consider this season - especially when you compare the price of these in relation to other new putters from leading brands.

Given we holed a few more putts with the Elevado, we would have to say we preferred that one most of the two, but the 2.0 is still a fantastic putter.

As we keep mentioning though, putting is much a personal preference and so we encourage you to check out each of the Frontline putters to find the best one for your game.

The only thing we would probably do is switch up the standard Lamkin grip for a SuperStroke grip to better suit our pencil grip - but again, that is personal preference when it comes to putting and the feel someone might crave on the greens.

Very possibly, the best new putters you are not considering in 2021. We recommend you get these to the front of the line.

AVAILABLE AT RETAIL FROM MARCH 20