Srixon ZX7 Driver Review | The BEST Driver That You're Not Thinking Of Trying!

Alex from GolfMagic tested the Srixon ZX7 driver and explains why this is the No.1 driver you need to try that you're probably not aware of! 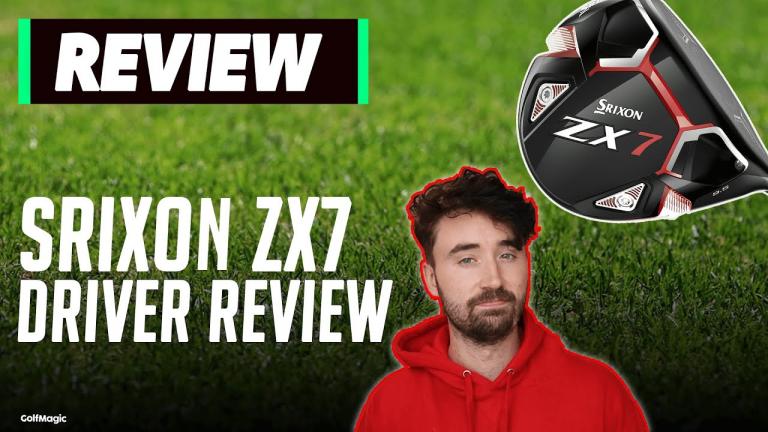 In modern drivers, we are treated to incredible technology that not only helps us to hit the ball further but also gives us a lot more forgiveness when we don't quite catch it out the middle, which for us amateur golfers is more often than not.

The Srixon ZX7 driver might not be at the top of your wish list if you're looking at buying a new driver, but in the video below, GolfMagic's Alex Lodge explains why you should definitely consider Srixon's latest driver if you're in the market for a new big stick.

The ZX range stretches from drivers to irons. There are the ZX7 and the ZX5 models, but we are focusing on the Srixon ZX7 driver.

Alex took this brand-new club to Knole Park Golf Club to assess its performance and compare it to other new driver releases in 2020.

What is the Srixon ZX7 driver all about?

The ZX range generates more speed and distance with the new rebound frame technology. This works by layering alternating zones of flexibility and stiffness.

These work in tandem to focus more energy on the ball at impact. This results in increased ball speed and distance off every tee.

The rebound frame is the best energy transfer system that Srixon has ever produced. The clubhead stiffness is one of the most important aspects that transfers more energy into the ball than ever before.

They are 15% larger than previous generations and this new crown repositions mass low, deep and around the perimeter to increase the MOI and forgiveness of every drive.

The ZX7 driver brings total control with a piercing ball flight and the adjustability features give players their desired launch conditions.

Which golfers should use a Srixon ZX7 driver?

Alex found that although the Srixon ZX7 driver could be suited to golfers with low handicaps, it should be tried by a variety of players with different handicaps.

Which Srixon ZX7 driver is right for you?

Here's a helpful table to help you decide which of the new Srixon ZX7 drivers are best suited to your game:

We didn’t know what to expect really, and we were a bit surprised. The colour scheme present throughout the whole ZX range is this red, black and grey design.

Alex was pleasantly surprised with the sound and feel of the Srizon ZX7 driver and this is a key selling point for golfers who need a new club at the top end of their bag.

We expected good numbers here as Srixon have really pushed distance and ball speed for this driver range. With the ZX7 being the less forgiving driver in the range, we expected not as tight of a dispersion. The results from the SkyTrak launch monitor said otherwise.

The average data from 20 hits with the Srixon ZX7 driver was:

The numbers produced with this driver were pretty impressive. Alex's club head speed was very fast and Alex maxed out at 126mph, whilst his ball speed maximum was 184mph.

The spin was a little too high, but a large factor towards that will be the shaft it was fitted with as Alex wasn't custom fitted for this driver.

Our only qualms with this driver were that the adjustability was lagging behind the other releases. It felt quite complicated and nowhere near as straightforward as the other front-running drivers. For a driver of this price, we'd want that to be a bit better.

This driver has a few flaws, but it feels superb off the face and we think it could definitely suit a lot of amateur golfers' games. For us, this club is the No.1 driver that golfers should be trying, that they're probably not even aware of!

Srixon is certainly very proud of their progress with the rebound frame and clubhead stiffness which results in faster ball speeds and further distance.

As you can see above with statistics and data, Alex proves that vast improvements can be made to your game with the Srixon ZX7 driver and this is also down to the repositioned mass and lightweight carbon crown.

If you’re in that mid-handicap range, we’d thoroughly recommend you try this driver out – if you’re a bit higher, then have a look at the ZX5. This really is an enjoyable club to hit, and it’s now available at your local pro shop or store.