Europe, one up! How Billy Foster PRANKED Tiger Woods, according to Lee Westwood

Westwood's former caddie Billy Foster will definitely be telling this story for the rest of his days... 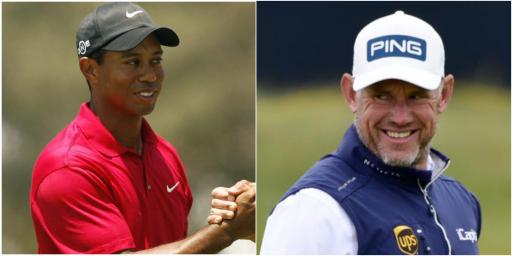 When it comes to Ryder Cup stories there is no doubt Lee Westwood has a few to share.

When he is not busy still defying father time at golf tournaments worldwide Westwood appears to be keen on fishing.

This great clip has surfaced of the European Tour legend trying to catch some fish with former footballer Jimmy Bullard.

Westwood details a brilliant story at the 2002 Ryder Cup at The Belfry where caddie Billy Foster needed to ease his nerves.

He heads to the toilet and realises there is no loo roll in "trap one" as Westwood describes so he heads next door.

As he is doing his business he hears golf spikes on the bathroom floor.

In those days, Tiger Woods was the only person who wore spikes, Westwood tells Bullard.

The rest of the story, suffice to say, is brilliant:

"Europe, one up" @WestwoodLee shares a hilarious story of how his former caddie Billy Foster saved Tiger Woods at the 2012 Ryder Cup

We knew there would be a great ending to this story and it was worth the wait.

Bullard, who previously played for Fulham, Wigan and Hull in the Premier League, erupts into a fit of laughter.

The clip was part of Bullard's fishing podcast Off The Hook where so far he has spoken to former footballers for Sky Sports.

Westwood was the first golfer to speak to Bullard in this podcast.

Foster previously caddied for Woods at the 2005 Presidents Cup.

When asked by GolfMagic previously about what Woods was like to carry for, Foster said:

"He was an absolute gentleman to work for. Everything he said was followed by please or thank you. I ended up having a bit of fun with him and a laugh and a joke. I was very honest with him."