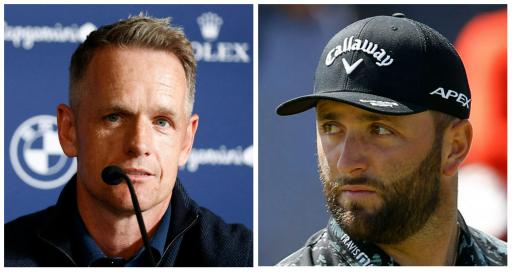 Rahm claimed the DP World Tour Championship for a third time last week at Jumeirah Golf Estates as Rory McIlroy was crowned the No.1 player on the circuit for the fourth time.

Much of the week was once again dominated by the differing opinions about that tour.

Callaway staffer Rahm made headlines when he described the world ranking situation as "laughable".

His point of view was completely at odds with the likes of McIlroy. McIlroy - who finished second behind Tiger Woods in the PGA Tour's PIP - had a different take.

McIlroy believes the system is fair. Adam Svensson emerged victorious at the RSM Classic on the PGA Tour last week. Golf fans [and Rahm] believed you could argue the Spaniard deserved more points for beating a field with considerably stronger players.

The pre-tournament favourite on the other side of the pond at Sea Island Golf Club was Brian Harman.

To be honest, it's hard not to merit in both points of view. Heaven knows what will happen.

Rahm doubled down in the aftermath of victory by saying:

"I'll say one more time, we don't get the same points for our win here, it's a bit of a joke."

One man who will be keeping a close eye on Rahm is Ryder Cup Europe captain Luke Donald.

Donald - who added a new vice-captain to his team heading to Rome - would have been pleased to see so many of Rahm's potential team mates in fine form at the Earth Course.

Did this cross Rahm's mind, at all?

[I am] not going to lie -- Luke Donald never crossed my mind on the golf course today, even though I love him and I know he's going to be a great captain, I had enough going on with playing a round of golf out there today.
"But it truly is. I haven't looked at the full leaderboard, but I know it's myself, Tyrrell, Alex and Rory in the top four, and I don't know who is after that. I think Rasmus [Hojgaard] -- well, the first six names, Adrian [Meronk], strong case for Ryder Cup.
"Definitely the first six names, if you were to take a team right now right here -- yeah, it's great to have people that you want playing great in the big events and the season next year as well. It shows the golf course is playing challenging and windy, this course, bermuda rough, not the easiest."

What do you make of the Official World Golf Ranking drama? Who do you think will win the 2023 Ryder Cup?