Jon Rahm has a completely different view to Rory McIlroy on this week's OWGR points on the PGA Tour and DP World Tour. 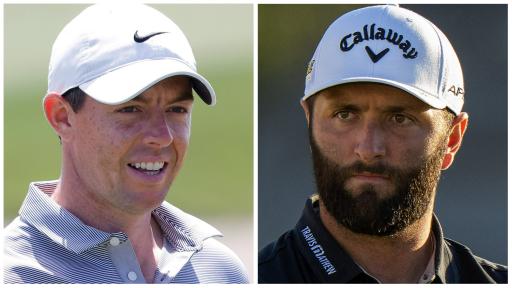 Jon Rahm has ripped into the current state of the Official World Golf Ranking (OWGR) system by calling it "laughable" multiple times during his Wednesday media press conference ahead of the DP World Tour Championship.

Rahm, who was speaking to GolfMagic and other golfing media on site at Jumeirah Golf Estates earlier today, believes the OWGR have severely "missed the mark" with their recent changes to the system.

The Spaniard used this week's winning points divisor to vent his frustration, with only 22 points being awarded to the winner of the flagship DP World Tour event and nearly double (38 points) that over on the PGA Tour at the RSM Classic.

To put Rahm's comments below into perspective, seven of the current world's top 25 are in this week's 50-man DP World Championship field, including World No.1 Rory McIlroy, while none feature in the RSM Classic. The highest-ranked player teeing it up on the PGA Tour this week is Brian Harman, ranked 26th.

According to the latest OWGR changes, the system claims "fields are evaluated based on the skill level of every player in the field, rather than just those in the field among the current top 200 of the ranking."

That does not sit well with Jon Rahm:

"I'm going to be as blunt as I can.
"I think the OWGR right now is laughable. Laughable. Laughable. The fact that the RSM doesn't have any of the top 20 in the world has more points than this event where we have seven of the top 20 (top 25) is laughable.
"The fact that Wentworth [BMW PGA Championship] had less points than Napa [Fortinet Championship], having players in the top 10 in the world is laughable.
"I understand what they are trying to do with the depth of field but having the best players in the world automatically makes the tournament better.
"I don't care what their system says. I think they have made a mistake. I think some aspects of it might be beneficial but I think they have devalued the value of the better players.
"Like easily, for example, you have the 30 best players of the year should not be punished because it's a smaller field. Depth of field doesn't mean better tournament. I could go on and on.
"I think they have missed the mark on that stance quite a bit."

Rahm was not done there, either.

"Listen, it's above my pay grade to know how the math works, and I understand they are -- prioritising is not the word but they are giving certain value to the depth of the field as well and the ranking on the lower parts of the lower.
"But would you rather win a tournament when you have the No. 1 player in the world there or because you have the 30th or 6th there? I think it's more valuable if you're beating the best players in the world. I think a lot of people would agree and I think it should reflect that.
"And if it's not like that, at least the point gap shouldn't be as vastly different as it is right now. Because we are not talking about the best PGA Tour events in the season where you have multiple, multiple high-ranked players. We are talking about a tournament that didn't even have one player in the top 20. That to me is an issue when you have seven of them here.
"I don't know what the fix is, right. I understand what they were trying to do when they changed some things, but I think like I said, they missed the mark."

Rahm's views on the current system are in complete contrast to those of McIlroy, who spoke particularly highly of the changes.

McIlroy considers this week's OWGR points divisor is fair given there are 94 more players competing over on the PGA Tour.

"Yeah, so when you look at two different fields, you've got a 50-man field here versus a 144-man field there," said McIlroy, who is bidding to win his fourth DP World Tour Rankings title this week.

"So just in terms of how the strengths of field is calculated, they have 90 more players to contribute to their strength of field.

"So the reason that this has got 21 points and the RSM has got 39 is the person that wins the RSM has to beat 139 other guys. You only have to beat 49 other guys here. It's a much fairer system. I think it rewards people that -- it's pure numbers. Strength of field has not hurt people feelings.

"Has it upset people? Yes, because people have been used to getting a certain amount of World Ranking points in one event and now it's dropped. But I would say those events were getting more than they should be."

McIlroy believes the refreshed OWGR system has taken years of work and thought, but it will still need more time to settle.

He added: "I think it's the fairest system that you can come up with right now. And a lot of work went into that, five years of algorithms and analysis and work went on into the system, so it's not as if it changed overnight.

"A lot has gone into it. It's the best one that we can come up with right now, and I think it will take a while. It will take another 18 months for it to play out because everyone gets two years into the rolling system.

"It's a little bit -- as it's being rolled out, there's a little bit of discrepancy, but once we get two years into it and have the minimum divisor and all the events."

McIlroy then signed off with this final line, followed by a smirk and a laugh.

"I think you'll see a fairer reflection of where everyone is ranked in the world... that is eligible to be ranked, I have to add that caveat."

Related: How to watch the DP World Tour Championship

DP World Tour pro Romain Langasque would appear to have sided with Rahm on the debate, judging by his tweet this afternoon.

Can someone explain to me how the new world golf ranking is working ? 7 player in the Top 25 in the world here this week . None of them on pga tour event and they get 16 point better for the winner ? #justasking @DPWorldTour

Here's what they released in a document about their recent changes:

"OWGR's field rating calculation has been modernised so that fields will be evaluated based on the skill level of every player in the field, rather than just those in the field among the current top 200 of the ranking.

"With this enhancement, minimum point levels, flagship tournaments and home ratings are no longer needed, removing the bias that can result from their use.

"Additionally, all players making the cut will receive ranking points according to the points breakdown.

"The other primary components of the OWGR system will remain the same."

Rahm does, however, believe LIV Golf deserves to be awarded world ranking points at least in some way.

Read his full comments on that here.

He also discussed whether or not Sergio Garcia's legacy would be affected following his move to LIV Golf.

Next Page: What Phil Mickelson did to upset LIV Golf pro "would set off a firestorm"