Ryder Cup captain Luke Donald says he knows LIV Golf players like Sergio Garcia and Lee Westwood know his job is "not to be political". 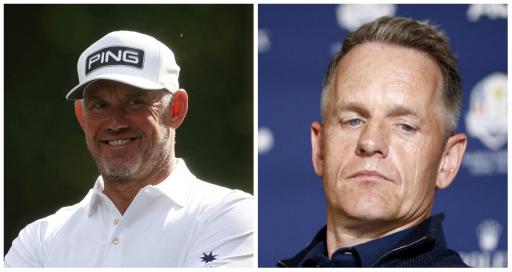 Ryder Cup Europe captain Luke Donald says he's "leaving controversy to others" as he revealed he's trying not to think about the court hearing in February that will determine whether the DP World Tour have the legal power to ban LIV Golf players.

As you would expect Donald, 44, has been very careful with what he has said about the prospect of LIV pros participating in the Ryder Cup next September in Italy.

He's also been tight-lipped with regards to what his opinion is on the bigger picture.

The game has become fractured with some of the game's elite trading insults that would be more suited on an episode of Jerry Springer.

Earlier this year on a trip to Italy - where Donald and his U.S. counterpart Zach Johnson met the Pope - he conceded that his plans for who would be in his team were largely in limbo.

Englishman Donald did admit he believed any LIV Golf-related bitterness would be swept aside when the Europeans bid to avenge their 19-9 dismantling at Whistling Straits, saying the competition is bigger than any one individual.

Donald will, however, have as many as six captain's picks when he builds his 12-man side. It marks an increase from the three players that Padraig Harrington was permitted, which forced him to make the then controversial decision to omit Justin Rose from the side.

The former World No. 1 will also have the top three players available from the world points list. Qualifying for the 2023 Ryder Cup began at the BMW PGA Championship at Wentworth in September.

That tournament was won by Shane Lowry, who said his win was one for the good guys.

Donald has given an interview to GolfByTourMiss, where he stated:

"What going on in men's professional golf at the moment is still kind of up in the air and I'm trying not to think about it.
"I know there's a court hearing coming up in February with the European Tour and LIV, so we are going to have to wait and see where it goes from there.
"And while I may be good friends with guys like Lee [Westwood], Sergio [Garcia] and many others, I am sure they know that my role is not to be political, nor is it my job to have any influence on those decisions.
"It's not like I am coming out saying 'this and that', so far I've not had to face that.
"There's always a way to avoid any controversy, and you leave that to others."

On the subject of Garcia, he has most recently given an explosive interview to Spanish newspaper Marca where he accused some of his former Ryder Cup teammates of behaving without class.

It wouldn't be too difficult to work out who Garcia has in his cross hairs as the likes of Rory McIlroy have been vocal about not wanting LIV players in the Ryder Cup side.

Garcia said that he would still love to participate and be "the Sergio who loves the Ryder Cup and puts an arm around everyone's shoulders".

The 2017 Masters champion specifically picked out Jon Rahm as not being included in who he thought was his friend.

This week Rahm came out swinging in support of LIV Golf, saying that professional golfers should be thankful for the changes that have benefitted the elite pros.