Matthew Fitzpatrick has offered his opinion over whether LIV Golf players should be able to play in the Ryder Cup after Rory McIlroy sounded off again. 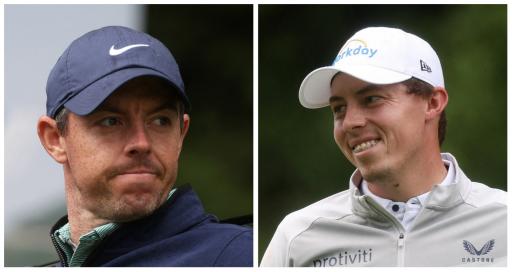 U.S. Open champion Matthew Fitzpatrick disagrees with Rory McIlroy over what should happen with the Ryder Cup selections.

McIlroy, 33, spoke to the media before making his debut at the Italian Open on the DP World Tour where he admitted that he "just couldn't help" himself from sounding off on the topic of LIV Golf again as he feels so passionately about the subject.

The Northern Irishman said that he does not believe the LIV players should be selected for the Ryder Cup.

"I have said it once I've said it a hundred times, I don't think any of those guys should be on the Ryder Cup team," said McIlroy at the Marco Simone Golf & Country Club, the venue for the 2023 showdown.

Fitzpatrick, 28, who will be playing in the DP World Tour event alongside his 23-year-old brother Alex, also waxed lyrical on the topic.

"I said it last week, and I just want to win The Ryder Cup, so in my opinion, I want to be part of the team myself but I want the 11 best guys we can get. I'm not really too bothered about where they are going to come from," he said.

"I just want to make sure that we win and I think that's what's most important. I know other guys might not necessarily agree with that but I know the winning feeling is worth more than any sort of arguments you might have with other players."

Fitzpatrick's comments came as Jon Rahm took to social media to deny that he is the next PGA Tour to hot foot it over to Greg Norman's league.

More: Greg Norman opens up on how he lured Cam Smith to LIV

"You and your source are wrong," blasted the Spaniard on social media.

Fitzpatrick, whose brother Alex also revealed he turned down a figure north of $2m to join the controversial series, also said that he spoke to one LIV player last week at Wentworth during the BMW PGA Championship where he admitted he would have no problem if they were on the team in Rome.

He said: "There's only one [player] that I had a conversation with last week. I told him I'd happily have him on the team. I'd have no issues. As I said, I want to win, and if that means having whoever on the team, that's all that matters to me.

"I haven't spoken to the others but I spoke to one and that's kind of -- you know, I told him my thoughts and feelings about the matter."

Next page: Will Zalatoris makes bold prediction about future of golf