Greg Norman, the LIV Golf chief executive, has gone into further detail about what lured Cameron Smith to the controversial circuit. 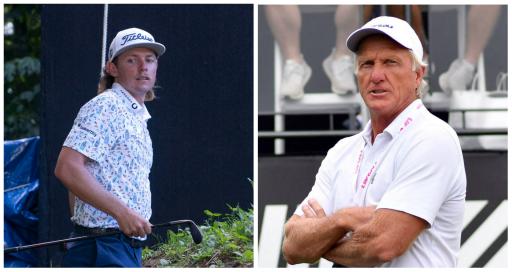 In an interview with the Sydney Morning Herald, the LIV chief executive says that Smith fully understands the value of the franchise model.

Smith, the 150th Open champion, reportedly was paid a dizzying sum of $140m to quit the PGA Tour. But going forward Smith and Marc Leishman will also own a 25 per cent stake in the franchise for running the all-Australian team.

Related: Who is the top-10 player heading to LIV next?

"You've got to think about it from Cam's perspective, he completely understood one thing that other people are struggling to understand: the value LIV Golf brings, and that new value is the franchise," he told the paper.

"Cam knows about it, but he's probably a little too young to understand what Kerry Packer did in cricket. He did what he did for the players, creating teams and night cricket … look where it's evolved to from there with the IPL. The value of those teams in India is incredible. That's the new value we bring.

He continued: "[Smith] sees the market that Australia presents and the market which, quite honestly, has been starved of high-quality players and new value for the game of golf. The Presidents Cup comes in there once every seven to 10 years, sucks the economy dry and then disappears."

Norman revealed that LIV's representatives have already met with toured 20 courses before they decide where LIV will play their first tournament in Australia, due to take place two weeks after the 2023 Masters.

Once again, he also told the Herald that LIV Golf is not trying to destroy the PGA Tour. It's the other way around, he claimed.

Norman also spoke on LIV's bid for Official World Golf Ranking accreditation. The Great White Shark said he would not change their 54-hole model even if it meant they would be given the green light.

The 67-year-old pointed to the fact that the BMW PGA Championship at Wentworth still handed out world ranking points last week.

After the death of Queen Elizabeth II, the flagship event of the DP World Tour was reduced to 54-holes. As many as 18 LIV Golf players competed in the tournament.

He said: "With all due respect to the passing of The Queen, but be consistent. They've done it with other tours around the world.

"It makes OWGR look obsolete if they don't [accept LIV]. If they wake up at the end of the year and Dustin Johnson is 102 in the world, is that not a laughing stock to the OWGR? There's two ways they can go: they can either fold, or they include LIV into OWGR. We'll move on. Everyone's happy after that.

"If [the majors] ban players because of the PGA Tour, they have no right to tell each of those majors what to do. They're independent organisations. Yes, certain members sit on their board. I get it and I understand that.

"[But] if you were a broadcaster you would be questioning the value of your investment for television if you don't have the strongest field in each and every one of them. I hope they stay Switzerland."