Rahm confirms he will be sticking with the PGA Tour despite multiple rumours linking him with a move to LIV Golf. 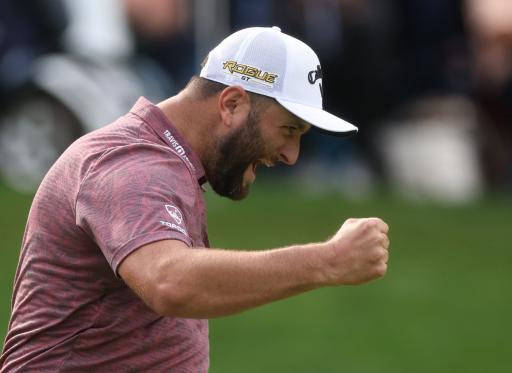 Jon Rahm has played down all talk that he is about to leave the PGA Tour and join LIV Golf.

Rahm, who finished tied second at the BMW PGA Championship on the DP World Tour last week, took to Twitter on Wednesday evening to deny rumours that had been doing the rounds on social media the past 48 hours.

Of course, speculation on social media should always be taken with a huge pinch of salt.

But there are some accounts out there that have previously nailed every single signing before it was made official.

Only Rahm has now burst their bubble.

I must inform you that you have started a losing streak because you and your source are wrong. I want to thank you for the lift in the PIP https://t.co/oaejFoXYrz

"I must inform you that you have started a losing streak because you and your source are wrong," tweeted Rahm.

"I want to thank you for the lift in the PIP [Player Impact Program]."

The 'LIV Golf Insider' account has since hit back at Rahm and will not let the rumour come to rest.

Another rumour picking up pace this week is that a World Top 10 player is headed to LIV Golf in 2023.

This particular player is allegedly so upset that he went as far as labelling the PGA Tour as the 'Rory Tour'.

My info has always been spot on for players going to LIV!

Been informed top 10 player is going. He is aggrieved at the new PGA proposal and the “Rory tour”

I will let you guess for a few days

There are likely to be more signings announced after LIV Golf Chicago, according to various news reports.

It is also understood that Norman is still intent on snapping up Hideki Matsuyama in a huge $400 million move, too.

What Jon Rahm said about LIV before the Genesis Invitational in February...

"All right. Well, I mean since I wasn't aware I was not going to have a press conference this week, that's why I take this time to say that this is my official, my one and only time I'll talk about this where I am officially declaring, let's say, my fealty to the PGA Tour.

"I'm a PAC member and I have a lot of belief in Jay Monahan and the product that they're going to give us in the future. There has been a lot of talk and speculation on the Saudi League.

"It's just not something I believe is the best for me and my future in golf, and I think the best legacy I can accomplish will be with the PGA Tour."

What Jon Rahm said before the U.S. Open...

"I almost feel -- I feel for Jay Monahan. If you see his time as a commissioner, he had to deal with COVID and now this. I don't know if he signed up for all this or not.

"I consider the PGA Tour has done an amazing job giving us the best platform for us to perform. I do see the appeal that other people see towards the LIV Golf. I do see some of the -- I'll put this delicately -- points or arguments they can make towards why they prefer it.

"To be honest, part of the format is not really appealing to me. Shotgun three days to me is not a golf tournament, no cut. It's that simple.

"I want to play against the best in the world in a format that's been going on for hundreds of years. That's what I want to see."

More: Was Phil Mickelson right all along?

He continued: "Yeah, money is great, but when Kelley [his wife] and I -- this first thing happened, we started talking about it, and we're like, will our lifestyle change if I got $400million? No, it will not change one bit.

"Truth be told, I could retire right now with what I've made and live a very happy life and not play golf again. So I've never really played the game of golf for monetary reasons. I play for the love of the game, and I want to play against the best in the world.

"I've always been interested in history and legacy, and right now the PGA Tour hast that."

He added: "My heart is with the PGA Tour. That's all I can say."

No new LIV signings this week but again, I have very good sources informing me that for the ‘23 season there will be at least 4 guys from the famous “players meeting” that will have switched.

“All 23 players left the meeting unanimous in their support of the proposed plan.”

What Jon Rahm said at the Tour Championship at East Lake...

Rahm spoke to the media after sweeping, structural changes were announced by the PGA Tour for the 2023-2024 season.

There's no denying that these were spearheaded by Tiger Woods and Rory McIlroy after the famous meeting before the season ended at East Lake.

The Spaniard expressed surprise at some of the stipulations about how many events PGA Tour members would be required to play going forward to qualify for the Elevated Events.

"If we have to play all those 20 [events], then yeah, a hundred percent [it's asking too much of the players]. I wouldn't be surprised if that changes, because that puts me in a difficult position having to play -- if I don't play -- if I go play in Europe in the fall like I'm going to, I have to play from January until August 20 times."

He added: "I think this is my 17th [tournament] from January and I don't think I could add any more.

"So yeah, especially with Ryder Cup and having to play four in Europe, yeah, I think it's a bit of an ask, and I wouldn't be surprised if they revise a bit of a rule or make an exception for some players.

"But if they do it for players like me and Rory, they might have to do it for everybody."

Rahm, before leaving that interview, also said that if the media wanted any more information about this topic then they were asking the wrong guy.

"If you want to know about that stuff, you know who of the two players you have to ask," he joked, possibly referencing Woods and McIlroy.