Ryder Cup: Harrington explains what happens if there is a Covid-19 outbreak

The European captain said there were a number of protocols in place should players test positive. 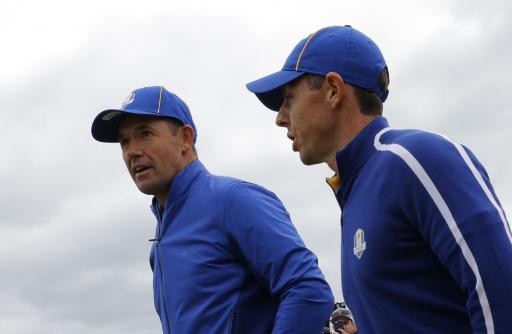 Even though the biennial event has been delayed for a year and the fairways will be lined with spectators there still exists credible threat.

And Harrington has confirmed there are a number of protocols in place should a player test positive for the virus.

Speaking to the media ahead of the first practice sessions for the European team, Harrington said the envelope rule will be in place.

Each captain places a player's name in an envelope and in the event a player from the other side can't play, said player would sit out.

This is the same approach used in every Ryder Cup should a player get injured ahead of the sunday singles.

It has caused controversy in the past.

According to the captain's agreement:

If one or two players from each team withdraw due to Covid, then they are treated as having been paired together.

"We have a very balanced team."

RELATED: TEAM EUROPE WIN OVER US FANS WITH CHEESEHEADS

Harrington was asked what would happen if there were to be a serious outbreak between players and staff.

He told the media: "While we've asked, it's still not completely clear what happens when we have—if, God forbid, we had a Covid outbreak of a number of players, but for one player it's pretty straightforward.

"Obviously the first two days it's four players sit out. I'm sure … so there's no issues on those two days, but obviously on Sunday you start losing a few players to Covid, it does affect the match in some way."

These scenarios are only in place once the Ryder Cup is underway.

If a player gets injured before the opening ceremonies they can be replaced.

The Americans can choose anyone they like but it's more complicated for the Europeans.

A replacement for Team Europe would be dependant on who is injured and how they qualified.

NEXT PAGE: WHO IS BROOKS KOEPKA'S FIANCÉE JENA SIMS?