"This is their top priority": Steve Stricker on Brooks and Bryson Ryder Cup aims

Steve Stricker has received assurances from Brooks Koepka and Bryson DeChambeau that they will put their differences aside for the Ryder Cup. 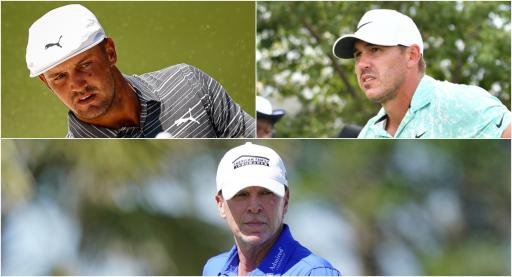 US Ryder Cup captain Steve Stricker has confirmed that Brooks Koepka and Bryson DeChambeau will put their differences aside for the good of the team ahead of the 2021 matches.

The feud between the American pair has been the hot topic for debate throughout the PGA Tour season and they are both virtually guaranteed to automatically qualify for the Ryder Cup.

There has not been a renewal of tensions for a considerable amount of time now. The spat ignited at the PGA Championship in May when Koepka rolled his eyes after DeChambeau walked behind him in an interview.

"They assured me that the team and the country and everything else that goes into this is their top priority," Stricker told Sports Illustrated.

"They said it's not going to be an issue, and I believe them. I trust them. As far as I'm concerned, it's been put to bed.

"We haven't heard Brooks say anything about Bryson lately. This Ryder Cup means a lot to these guys. Neither one wants to be the root of a problem. They both understand."

The United States have an extremely strong team to take to Whistling Straits at the end of September, and Koepka and DeChambeau are two of eight Americans in the world's top 10 players who have a good chance of selection.

At The Open Championship last month, the four-time major winner Koepka said that the rift would not be an issue, but he fully expects not to be paired with his big-hitting verbal sparring partner in any of the matches in Wisconsin.

Both major champions are currently playing in the BMW Championship in the FedEx Cup Playoffs, with the hope of lifting the famous trophy next week at East Lake and picking up the top prize of $15 million.