Brad Faxon: "Bryson DeChambeau DECLINED to play with Brooks Koepka at US Open"

According to former PGA Tour player Brad Faxon, Bryson DeChambeau has declined the possibility of being paired with Brooks Koepka for the first two rounds of the US Open. 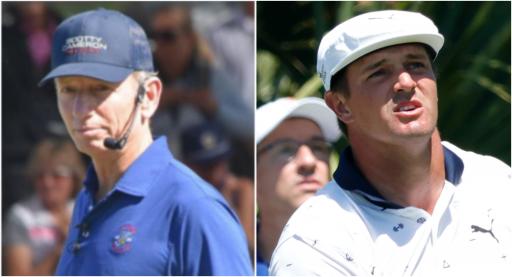 According to the former PGA Tour player Brad Faxon, Bryson DeChambeau has declined the chance to play with Brooks Koepka in the opening two rounds of this week's US Open.

While speaking on SiriusXM US Open Radio, Faxon revealed that the USGA called DeChambeau to ask him if he would be ok with playing alongside Koepka in the same group, but he declined.

The tee times and groups for the first two rounds of the US Open are yet to be announced and it was rumoured that the pair, despite going through a feud over the last few weeks, would be paired together.

Brad Faxon tells Michael Breed what he's heard about Brooks and Bryson possibly playing together at the US Open@BradFaxon I @MichaelBreed I @usopengolf pic.twitter.com/rhqHyh8AfN

It is well-known now that Koepka and DeChambeau share a dislike for each other and a spat ignited at the PGA Championship last month when Koepka was agitated by DeChambeau during an interview at Kiawah Island.

Koepka has since revealed that it wasn't anything that the big-hitting American said that made him lose his train of thought, but the loudness of his words instead.

RELATED: RUMOUR: BROOKS KOEPKA AND BRYSON DECHAMBEAU PLAYING TOGETHER AT US OPEN?!

Since then, Koepka has said that this type of spikey relationship is good for the game of golf, while DeChambeau said that it could benefit his ranking in this season's Player Impact Program.

The pair have three US Open titles between them. DeChambeau is this week's defending champion after winning his first major title at the tournament back in September at Winged Foot.

Koepka has won four major championships and two of them came at consecutive US Opens in 2017 and 2018, respectively held at Erin Hills and Shinnecock Hills.