Bryson DeChambeau JUMPS BEHIND Brooks Koepka during interview at US OPEN!

This could be the most significant and entertaining development in the feud that we have seen so far... 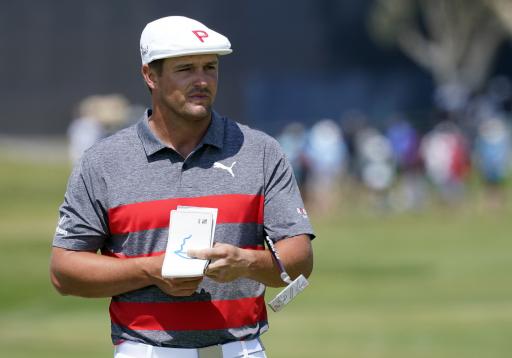 During yesterday's first round of the US Open, Bryson DeChambeau photobombed an interview with Brooks Koepka after the four-time major champion carded a 69 on Thursday.

As Koepka was speaking during the interview, DeChambeau noticed his verbal sparring partner and deliberately jumped and waved his arms in the background.

This could arguably be the most significant development in the feud between the American pair, and it is fair to say, it is probably the funniest as well.

In the last couple of weeks, DeChambeau has talked of how much fun he has had with the feud with Koepka and he has described the situation as "great banter."

He has also said before that the social interactions and attention that he has gained as a result of the spat can only benefit his chances of winning money in the Player Impact Program.

There were rumours previous to this week that claimed the two major champions would be paired together for the first two rounds at Torrey Pines, but this proved not to be the case.

Despite DeChambeau's antics, the big-hitting 27-year-old failed to hit the ground running in San Diego, carding a 2-over-par 73 to sit six shots behind current leaders Russell Henley and Louis Oosthuizen.

In a round that was delayed by fog and with some players not completing 18 holes, the 2020 US Open champion made six bogeys and four birdies to settle for 2-over-par.

On the other hand, Koepka played impressively and although the two-time US Open champion led the way on 4-under-par at one stage, he finished on 2-under-par for the day.

NEXT PAGE: TWO-TIME US OPEN CHAMPION BROOKS KOEPKA GOES LOW IN FIRST ROUND AT TORREY PINES