Golf fans react as Lee Westwood WEARS A HOODIE at the US Open!

Lee Westwood is in contention at the US Open at Torrey Pines as he continues to roll back the years on the PGA Tour this season. 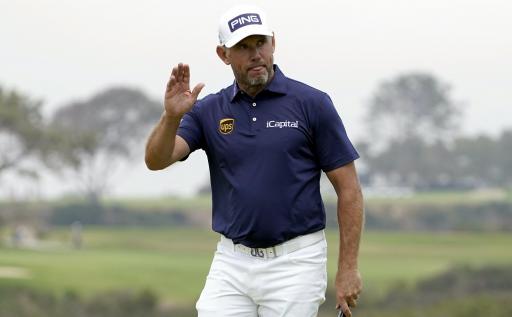 When hoodies were first worn on the PGA Tour and the European Tour by players such as Tyrrell Hatton and Rory McIlroy, it split opinion as to whether this breaks golf's proud dress code.

It is arguably a sign of the times and an indication of where the sport's apparel is going, however, it now seems to have caught the fancy of the game's most experienced players too.

Lee Westwood sported a golf hoodie yesterday at the US Open championship, as he played his away into contention at yet another major tournament.

Last week, the 48-year-old married his girlfriend and now caddie Helen Storey in Las Vegas. The pair will be hoping that this is a good omen for their week in San Diego.

"No, not on the golf course anyway. Next, you'll be wearing ripped jeans?" one fan said.

"No worse than David Brent, when he turned up at work with a leather jacket and an earring," one fan commented.

"It's the future of golf. Needs to be more relaxed to attract more people to the game. Did you wear flip flops in the clubhouse after?" another fan said.

"I am 52 this year I wear hoodies never let anyone tell you what to wear, looking good Lee," another fan commented.

"Better give it back to your son Lee," one fan said.

After shooting a solid first-round score of level-par, Westwood couldn't manage to find a birdie on Friday. His score of 72 has put him six shots behind Richard Bland and Russell Henley on 1-over-par, heading into the weekend.

NEXT PAGE: R&A CONFIRM THE OPEN WILL HAVE 32,000 FANS EACH DAY AT ROYAL ST. GEORGE'S