Viktor Hovland had to withdraw from the US Open during his second round due to an injury to his eye which was sustained before his round. 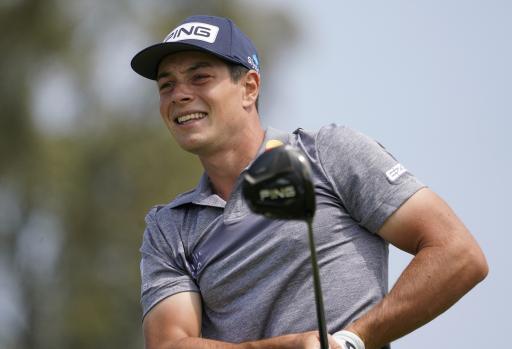 Viktor Hovland has withdrawn from the 2021 US Open after he sustained an injury to his eye which originated from a practice session before his second round.

The Norwegian was practising before his second round on Friday in San Diego, looking to improve on his first-round score of 74.

However, when hitting a bunker shot, some sand flew up into his eye and remained there despite Hovland's best efforts to remove it. The irritation got worse but the 23-year-old chose to commit to his second-round tee time.

The condition of his eye marginally improved during his first nine holes as he was aiming at just making the cut due to his injury. But by the 18th hole, which was his 9th hole of the day, his scores began to represent his struggle.

Hovland was disappointed to withdraw from the tournament, but it seemed it would've been too hard to continue for the two-time PGA Tour winner.

As you can see by his Instagram post above, Hovland tried to see the funnier side of things by giving an eloquent and well-written summary of his ordeal.

It is a great shame to see such a popular and outgoing player withdraw from a major tournament, Hovland has been a breath of fresh air on the PGA Tour in the last couple of years.

The World No.13 has finished in the top 10 on six occasions this season, including second-place finishes at the Farmers Insurance Open and Workday Championship at The Concession.