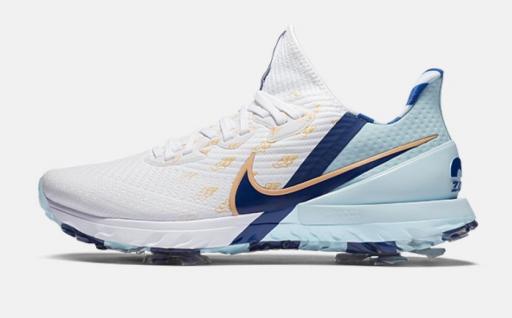 When Nike drop their limited edition golf shoes around every golf major, it doesn't take long for them to fly off the shelves and the new 'Wing It' collection could be one of the fastest sellers the golf shoe market has ever seen.

The limited edition 'Wing It' collection from Nike is inspired by Winged Foot, the destination for this year's US Open set to take place next week after it was pushed back due to the coronavirus pandemic.

The collection will be available to anyone registered as a Nike Member on their website on September 14 and to the rest of the public on September 17.

Four of the five limited edition golf shoes for the US Open feature a repeating golden foot with wings, inspired by the New York venue Winged Foot where Gary Woodland will look to defend his title.

The fifth shoe from the US Open collection is the Jordan V Low golf shoe ($220) which features a royal and light blue motif along with shark-tooth print that has become iconic in the Jordan range. Flip the shoe over and you will also find the word "wings" printed on the bottom. The Jordan V Low golf shoe will hit the market a little later than the rest of the US Open collection on September 18.

NEXT PAGE: Brooks Koepka WITHDRAWS from US Open