James Piot, the winner of the 2021 US Amateur, played in the inaugural LIV Golf Invitational Series event last week, finishing in a tie for 25th. 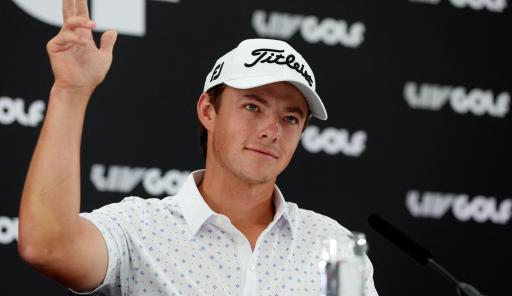 Top amateur golfer, turned budding professional James Piot was spotted with a LIV Golf jumper on while practising ahead of the US Open.

Courtesy of TheShotgunStart on Twitter, a picture was posted of Piot wearing a black jumper with the white 'L' for LIV Golf on the left breast.

Piot won the US Amateur Championship in 2021, the same tournament won by the likes of Tiger Woods, Bryson DeChambeau and Viktor Hovland, which is why he is at The Country Club in Brookline this week.

The 23-year-old was part of the 48-man field to take part in the first-ever event of the LIV Golf Series last week at Centurion Golf Club near London.

He faced the press on Tuesday afternoon in Hemel Hempstead alongside Kevin Na, Talor Gooch and Sihwan Kim who were all quizzed on their motivation to play in the controversial new breakaway series commissioned by Greg Norman.

LIV’s answer to Si Woo Kim’s LUP line? James Piot on the driving range in a LIV Golf sweater with his initials on it. pic.twitter.com/PwcwdlXfls

Piot had the pleasure of making his debut at The Masters in April too, but he missed the cut. He has missed the cut in all five of his appearances on the PGA Tour this season.

The young American turned professional last month, but his potential PGA Tour career will be on hold as it's unlikely he'll be allowed on to the tour by commissioner Jay Monahan.

Piot is fairly inexperienced in the professional sphere and along with his fellow LIV Golf rebels, it will be interesting to see the reception they get in Boston this week.

If he chooses to wear more LIV Golf attire, it certainly could be hostile and all eyes will be on him as he tees it up with major champions Jon Rahm and Collin Morikawa in the first two rounds.

Piot seems to have put his eggs in the LIV Golf basket at a very early stage of his professional career, however, the DP World Tour could be an option should he wish to pursue other avenues. This will depend on the DP World Tour's sanctioning in the coming days as well.