Rory McIlroy on the LIV GOLF rebels: "They've made their bed"

Rory McIlroy outlined the charity work of the PGA Tour and the opportunities it has given him as key reasons for not defecting to the LIV Golf Series. 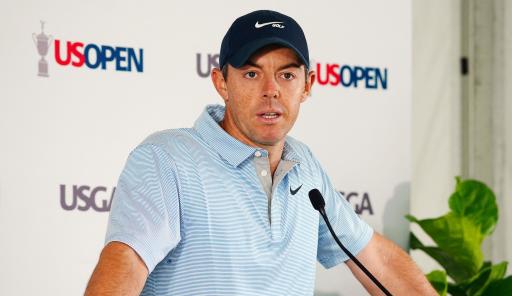 Rory McIlroy referred to a phrase that his dad Gerry once told him when talking of the LIV Golf rebels: 'You've made your bed, now lie in it'.

The Northern Irishman spoke to the press on Tuesday in Brookline and as one of the PGA Tour's strongest advocates, he outlined the work of Jack Nicklaus and Arnold Palmer who helped develop the tour.

McIlroy has personal relationships with the likes of Ian Poulter, Sergio Garcia and Lee Westwood as seen at the Ryder Cup, but he dismissed claims that he could fall out with players or lose friendships as a result of the LIV Golf emergence.

Legacy has been a keyword in the 33-year-old's rhetoric against Greg Norman's breakaway tour and he used his press conference at Brookline to stamp down his stance even more.

"The PGA Tour was created by people and tour players that came before us, the likes of Jack Nicklaus, Arnold Palmer," McIlroy said.

"They created something and worked hard for something, and I hate to see all the players that came before us and all the hard work that they've put in just come out to be nothing.

"I think one of the other things as well as the PGA Tour has certainly given me a lot of opportunities, and I've benefited a lot from that, but I think what they've done for charity.

"They've raised - if you put all the other major sporting organizations in this country - so NFL, MLB, NBA, NHL, if you put all their charitable dollars combined, the PGA Tour has raised twice as much as that in their history.

"That is a massive legacy and something that I don't think people talk enough about, so when you are talking about the tour and everything that's happening right now, you have to see the bigger picture than just the golf, and I think I've tried to take a wider view of everything, and I just think it's the right thing to do.

"I'm not sure if they're totally - I don't think they're complicit in it. In a way I think - look, they all have the choice to play where they want to play, and they've made their decision.

"My dad said to me a long time ago, once you make your bed, you lie in it, and they've made their bed. That's their decision, and they have to live with that."

McIlroy also addressed questions about the letter sent from the 9/11 Families United group to the likes of Phil Mickelson and Dustin Johnson. He sympathised with their feelings towards the defectors and knows people who lost loved ones in 2001.

The four-time major champion is set to tee off in the first two rounds this week with Hideki Matsuyama and Xander Schauffle in search of his second US Open title.

Next Page: Brooks Koepka unhappy with "black cloud" of LIV Golf in US Open week