US Open: Instagram golf coach Manolo Vega: "This tournament is second to none!"

Instagram star and golf coach Manolo Vega spoke exclusively to GolfMagic about the US Open, his unique coaching technique and his early life in golf. 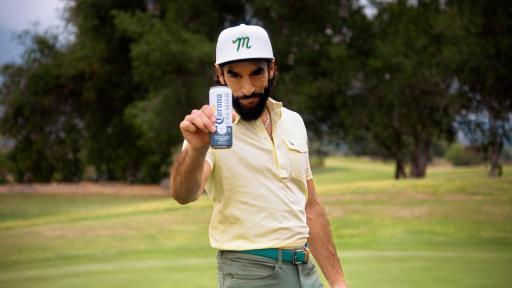 Instagram star and golf coach Manolo Vega believes the US Open is second to no other tournament in golf, providing the hardest challenge in the game.

Speaking exclusively to GolfMagic in partnership with Corona Premier, Vega was frothing at the mouth at the thought of the long rough and the narrow fairways at The Country Club in Brookline.

Finding the short grass will be crucial in Massachusetts this week and the basic fundamentals of the game are what Vega has always instilled in his students since he began coaching at a young age.

Jon Rahm is the defending champion this week after picking up his first major title at Torrey Pines last year, and Vega thinks whoever finds the most fairways has the best shot of glory.

"This is one of my all-time favourite actions to watch. Golf is so hard when it’s easy and they make the US Open golf course the hardest," Vega told GolfMagic.

"We’re going to make this as hard as possible and see who is the nastiest. The fairways are the most narrow in all of the tournaments and the rough. Have you seen the rough? Oh my god!

Related: US Open: Everything you need to know about the 2022 US Open in Brookline

"I've never been to Brookline, I’ve seen a couple of videos and I’ve seen stuff on the Golf Channel so far, to see what it’s like because I like to see how it’s playing. The way the rough is growing out at this golf course, the ball just disappears.

"Look at fairways in regulation, look at the person who is driving the ball the best, those are the people that are going to be able to have more of a calm, less stressful type of tournament.

"That looks like a guy who I can keep my eye on. It’s golf bro, anything can happen. The best player in the world can have a tough couple of days and boom that’s it, they don’t make the cut. It’s life!"

As a child, Vega identified his grandfather as his main inspiration to play as many sports as possible besides golf, because "golf is going to be here forever."

He played baseball, basketball, football and even rugby in his junior years, but Vega found a passion for helping amateur golfers "tap into their true potential."

You can watch his swashbuckling style on his Instagram page where he has 755,000 followers. Vega has an infectious attitude to life and this is why Corona Premier has teamed up with him to promote the #CoronaPremierBeachClub sweepstakes.

He practices every day, between teaching his students, to be ready for the moment he wants to play competitively. When asked about his favourite swings in the game, Vega had a very intriguing and convincing answer.

"The number one swing that I have ever seen to this day is Ben Hogan. Watch a video of that guy’s swing, that’s a little guy, he wasn’t big, he wasn’t huge, he wasn’t powerful and he wasn’t ripping it off the planet," Vega added.

"He just harnessed the correct way to swing a club. That guy and Sam Snead, the smoothness in which they swing a golf club! I’m old school, there are guys nowadays who can really swing that thing, their balance and their power are exceptional, but I go way back.

"We go back and back. Gosh, if I had a video of my grandfather’s swing, it was Hogan, it was Snead, it was these guys. How you move through it and how you walk into the shot, it’s not just the swing.

"The swing takes place for me as you’re walking into the shot, you can see what kind of swing is coming from a guy, there are a few guys on tour that do that. They have a swagger when they walk into the shot. I can see that this guy is about to hit this thing so good and you can see it before the shot, but that’s me!"

Corona Premier is an official sponsor of the US Open this year and they are giving one lucky fan the chance to play a round with Vega. It will certainly be a round they'll never forget.

Next Page: Shane Lowry rules himself out of ever joining LIV Golf: "Had it up to here"