10 years after winning his first major title at the US Open, Rory McIlroy has given himself another fantastic opportunity to win the tournament again at Torrey Pines. 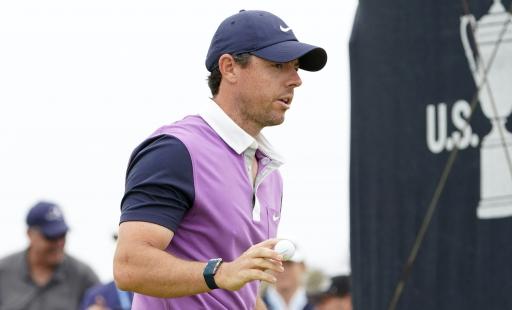 Rory McIlroy fired a score of 4-under-par in the third round of the US Open to put himself firmly in contention heading into Sunday at Torrey Pines.

The Northern Irishman began his round on Saturday six shots behind the 36-hole leaders Richard Bland and Russell Henley on 1-over-par, but by the end of the day, McIlroy was just two shots behind Henley and new co-leaders Louis Oosthuizen and Mackenzie Hughes.

The 32-year-old had a quiet start to his third round in San Diego with just one birdie on his front nine, but it was the back nine where he came alive and launched his championship bid.

The four-time major champion made birdies at the 10th and 12th holes, and almost made an albatross on the par-5 13th hole. His approach clattered into the flagstick and bounced across the green, where he two-putted for another birdie.

Although he gave one back to the course on the 15th hole, he found his fifth and final birdie of the day at the par-5 18th hole to finish on 3-under-par for the tournament.

Henley had a mixed round on Saturday, making four birdies and four bogeys on his way to a level-par score. Nonetheless, he retained his lead on 5-under-par and now shares it with two emerging contenders.

Oosthuizen, challenging at yet another major championship, shot 1-under-par on day three which was headlined by an incredible eagle on the 18th hole. Hughes made an eagle of his own on the 13th hole on his way to a 68 to share the 54-hole lead at the US Open.

Eagle at the last propels @Louis57TM into the co-lead. pic.twitter.com/0ryMbzuYrp

Unfortunately, Bland came back down to earth in San Diego as he struggled to a round of 6-over-par. The Englishman made six bogeys to drop back to 1-over-par for the week, six shots behind the new group of leaders.

Defending champion Bryson DeChambeau put his hat in the ring too on Saturday with a solid score of 3-under-par. His bogey-free round with three birdies also puts him just two shots behind on 3-under-par for the week.

Major champions Dustin Johnson, Collin Morikawa and Justin Thomas are all within five shots of the leader, while Jon Rahm and Xander Schauffele are also in good positions on a star-studded leaderboard.