Sergio Garcia suffers UNLUCKIEST BREAK in third round of US Open

Sergio Garcia experienced some horrible luck on the 13th hole at Torrey Pines during his third round at the US Open. 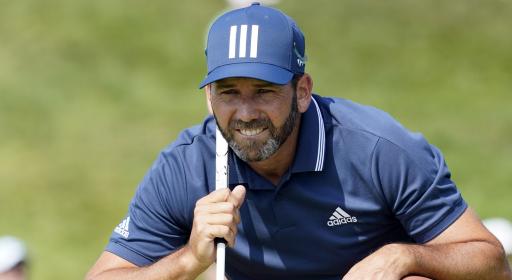 Golfers all around the world dread bad luck when they go out on to the course, but Sergio Garcia experienced something that was beyond just bad luck on Saturday in San Diego.

Garcia was in the fairway on the par-5 13th hole at Torrey Pines, way off the pace on 5-over-par for the tournament and attempting to claw some ground back on the leaders.

However, his approach shot to the green bounced right next to the hole and clattered into the flagstick. Much to the Spaniard's anguish, his ball bounced back off the green and ended rolling back to his feet.

Right back to his feet.

The 2017 Masters champion was then faced with a replica of the shot he had just taken and he went on to make a damaging double-bogey 7, which pushed him down to 7-over-par for the week.

The 41-year-old shot a solid score of level par in the first round on Thursday, but he carded a 3-over-par 74 in his second round to drop eight shots behind Richard Bland and Russell Henley.

Recently, Garcia has struggled to reproduce the form that won him his first major title back in 2017. He has missed four cuts in his last five events and has only finished in the top 10 on the PGA Tour twice in his last 14 events.

Since he earned his green jacket four years ago, he has missed the cut in 10 of his last 14 major championships, which is surprisingly bad form considering the career and ability of the popular Spaniard.

NEXT PAGE: "AM I EVER GOING TO ESCAPE THAT QUESTION?": JON RAHM ASKED ON TEMPER AT US OPEN