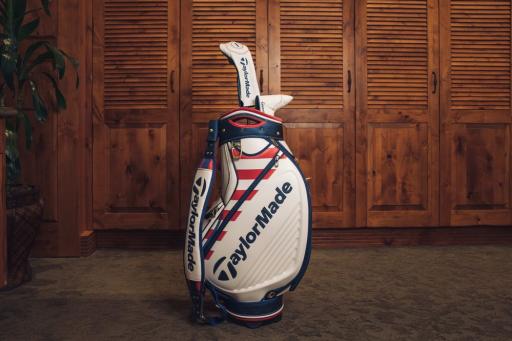 TaylorMade designers have hit one out of the park with their new Tour bag and head covers for the 2018 US Open.

Featuring an American theme, the kit also has a baseball motif, with pinstripes and red stitching on show.

TaylorMade's staffers - DJ, Rory, Rahm, Rose, Tiger, Day...that lot - will be using the gear, and golf fans can get their mitts on it too via the link at the bottom.

The staff bag incorporates an American design with tributes to America's pastime. The bag features the colours of the American flag with red and white stripes down the side as well as debossed stars on the blue crown and base sections.

"The thing I love about this bag is that it has a multi-sport dimension to it,” said Dennis Kennedy, TaylorMade Graphic Designer.

“Naturally, it's a golf bag with everything you'd expect to have on a Tour staff bag, but we also incorporated a baseball element into it for the 2018 U.S. Open at Shinnecock. The baseball elements are fairly subtle, but there's an attention to detail in those elements that baseball fans—especially New York baseball fans—will really appreciate."

"The thing I love about this bag is that it has a multi-sport dimension to it.”

Explore the #NewYork-inspired accessories #TeamTaylorMade will have in play for the 118th U.S. Open at Shinnecock & shop to own your piece #USOpen history.

Some of the baseball-related elements within the design include sections featuring pinstripes to pay tribute to baseball uniforms and red stitching to resemble the seams of a baseball. The accessories team even went as far as to introduce a new leather material that's very similar to the leather of a baseball.

"I think the people who will really enjoy this bag are the fans, whether they're golf fans, baseball fans, or both,” Kennedy continues.

“And when you take a look inside the pockets of our staff bag, you'll see that we've lined it with one of the most iconic things a fan enjoys about going to a ball game... hotdogs. It's a fun element to bring into the bag, and I think our Tour players and our fans will enjoy the surprise of seeing hotdogs in their golf bag once they open it up."

To match the look and feel of our 2018 custom staff bag, the driver, fairway, and putter headcovers have also been custom-crafted with a baseball theme.

For the driver/fairway headcovers, pinstripes have been incorporated into the number patch—matching the style that New York fans will recognize as the iconic retired jersey numbers around their stadium.

For both the blade and Spider putter covers, red stitching has been added into the design to resemble a baseball seam. Additionally, genuine white leather was introduced to achieve the look and feel of a baseball.

"Although these headcovers were created specifically for this year's second major, it is an everlasting design that golf fans and baseball fans will be able to enjoy," Kennedy said.