Why "streaky" Viktor Hovland is changing his approach to putting

Viktor Hovland is hoping a fresh approach to reading the greens can open the floodgates to the majors. 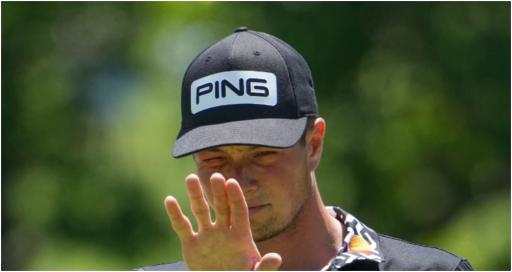 Viktor Hovland was once unflinching in what he thought about his short game: "I just suck at chipping".

Now, the young Norwegian is addressing another perceived weakness in his game ahead of the season's second major: his streaky putting.

Hovland arrived at Southern Hills this week in Tulsa, Oklahoma and was seen in his practice round using the AimPoint method.

It's a type of system that is embraced by several PGA Tour pros including former World No.1 Dustin Johnson.

Earlier in the season, Keegan Bradley was absolutely roasted by golf fans for allegedly being far too slow over a short putt at the Players.

Hovland, 24, who described the situation this week regarding the absent Phil Mickelson as "weird", explained his new approach to the greens.

"So last year, I started with [golf instructor] Jeff Smith and we started to work on AimPoint," he told the media.

"So that's been the biggest thing for me. I've always had a very consistent stroke. Might not be perfect, but if you can start the ball on line and do that consistently, you know, you're doing all right.

"But my thing was just, I really had a hard time reading greens.

"One week I could get really hot and just see the lines really well and the next week I just had no chance.

"And AimPoint has just really given me a system, a system that doesn't work every time, but it at least gives me, you know, framework that's a lot tighter. So that's really helped me.

He continued: "Yeah, and then it's just getting comfortable out here playing tournaments where you're playing on firm greens, fast greens. You know, growing up in Norway, you don't really do that a whole lot. So it's just getting more reps in is also a part of it."

Hovland said he's hoping that if he wins one major then the floodgates will open.

He was also asked about whether or not he always felt he would be successful in the game due to his stellar junior days.

After he won the U.S. Amateur, he was tipped to take the golf world by storm.

The World No. 6 said: "Actually, no. I just never really felt like I was that good. In college, I was just like, okay, I don't hit it that far, I'm a streaky putter, my short game is average but I hit it really straight, and hit kind of a low cut and I knew where it went and I could shoot pretty good scores.

"I'm always trying to get better, and the better you get, you know, you start to believe things a little bit more.

"But I would say when I won the U.S. Amateur it kind of became, you know, I started believing in myself a little bit more, and I had a great junior year in college before I turned pro.

"And then it was always the sense, like in college, you know, okay, I'm beating a lot of college kids, but the PGA Tour players, they are the next level.

"They do everything perfect, but then I started realizing, they actually don't do it perfect, but they are still pretty good and they just manage it really well, and that's kind of the most important thing."

Next page: Justin Thomas blasts price of water and beer at US PGA