Talor Gooch reveals why he decided against watching Tiger Woods in person at the 2007 PGA Championship in his home state. 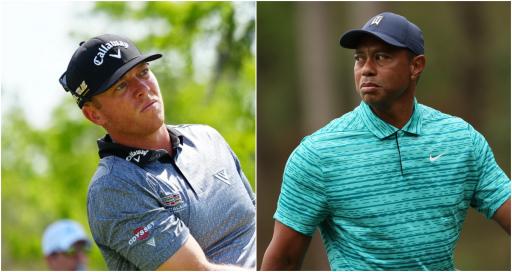 PGA Championship debutant Talor Gooch has revealed he turned down the opportunity to watch Tiger Woods play in person at Southern Hills when he was a teenager because he didn't want to "sweat my butt off".

Gooch, 30, guaranteed his spot in all of the majors this season courtesy of his first PGA Tour victory at the RSM Classic last November.

"This is what you dream about, playing the PGA Championship in your hometown at one of your favorite places in the world," Gooch told the media.

"Growing up watching Retief [Goosen] win here, watching Tiger win here; there's a luster about this place that makes it that much more special that this is the year that I guaranteed myself to play in all of the majors for the first time so it was very, very cool."

Yet Gooch wasn't here in person when Woods, now 46, won the PGA Championship here at Southern Hills in 2007 when he was at the peak of his powers.

He turned down the opportunity because it was just far too hot. Gooch had spent the entirety of that summer playing junior golf in the sun and just wanted a break from that.

Gooch said: "I remember a buddy calling me, saying, "Hey, I've got some tickets, do you want to come up?"

"And I remember thinking, it's like 105 degrees: I can go and watch this in person and sweat my butt off, or I can watch this on TV.

"So I watched it on TV. I had spent a whole summer of playing junior golf sweating my butt off. I was like, you know, what I'm going to sit this one out and watch it on TV."

Woods hoisted the Wanamaker in 2007 to claim his 13th major after making a safe par at the 72nd hole.

He had difficulty getting into his stride during the week but shot a glistening 63 on the Friday to get himself back into the tournament. It was peak Tiger.

In 2008 he won the U.S. Open on a broken leg at Torrey Pines but would be made to wait 11 years before tasting another major victory at the 2019 Masters.

Before Gooch departed his press conference, he was stumped by one question.

He had won a lot during his junior and college career but was made to wait a long time until he first won on the PGA Tour.

What did he figure out to do finally do that?

"For me, biggest turn in my career is when I shifted my mindset and realized, let's get as good as we can today and then eventually, those days added up and it turned into a win on the Tour."