Viktor Hovland was as disillusioned as everyone when defending champion Phil Mickelson withdrew from the PGA Championship last week. 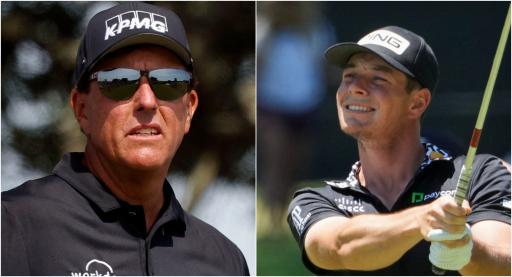 Viktor Hovland described the thought of Phil Mickelson not defending his PGA Championship title as a "weird situation."

"We have just been informed that Phil Mickelson has withdrawn from the PGA Championship," the PGA of America posted on Twitter last week.

"Phil is the defending champion and currently eligible to be a PGA life member and we would have welcomed him to participate."

Hovland is playing for just the second time since The Masters at Southern Hills this week and he was as baffled as the rest of us to hear that Lefty was continuing his exile from the PGA Tour.

"I mean, it's a bizarre situation, that's for sure. It's not often the defending major champion doesn't come back to defend. The only moment I can remember was when Rory got injured. So it's certainly a weird situation," said Hovland.

"I think we all would have liked to have Phil here and tee it up and see how he would have done. The tournament - or the way that he won it last year was pretty spectacular. So you know, it's just a weird situation."

After biographer Alan Shipnuck published his comments about Saudi Arabia in February and his collusion with what has now become the LIV Golf Invitational Series, Mickelson has taken himself away from his tour career.

The 51-year-old made history in 2021 by becoming the oldest ever major winner at this tournament at Kiawah Island, but his relationship with the PGA Tour has effectively collapsed as a result of his behind-the-scenes actions.

As for Hovland, he is aiming to win his first major championship this week in Tulsa. He has won at Mayakoba and in Dubai already this season and this short break could help him to seal his breakthrough moment.

"I would say I spent the last three weeks really well. I was not very happy with my game the last few weeks. Not that it was that far off, but I was just doing a few more dumb mistakes than I normally do," said the World No.6.

"So I was pretty motivated to get to work, and the last three weeks have been really good. I feel like my game is in a way better place.

"But at the same time, there's always stuff to work on, but I feel like my game is good enough to really contend this week, and yeah, I wouldn't be surprised if I get off to a nice start and play well this week."