Andrew "Beef" Johnston filmed the drama unfold as his neighbours rallied to save a stuck cat. 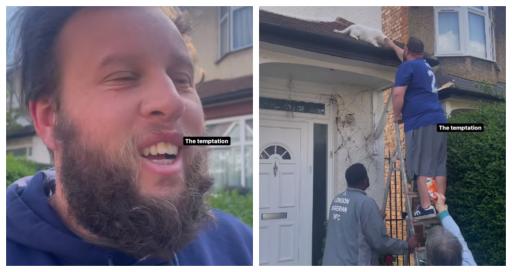 Andrew "Beef" Johnston hasn't been seen playing professional golf on the DP World Tour for quite some time due to injury.

But the pro who captured hearts at the 2016 Open Championship appears to be in very good spirits.

He's shared a video on his Instagram of a bit of "drama" in the neighbourhood where he lives. That drama? A cat that got stuck.

In the hilarious clip, we can only presume it's the moggie's owner standing by the ladder trying to tempt the kitty down with a Dreamie.

"What a stupid cat!" says Beef. "If there's ever been a time I've wanted to pull James's shorts down it's now."

What's even more hilarious is that another man - with an even bigger ladder - arrives on the scene.

It seemed as though the drama that unfolded was revolved relatively swiftly.

Johnston said in the comments that he is currently injured. We're not sure when he is expected to return but we love a character.

Beef smiling on the fairways is definitely something we'd love to see soon. He is currently ranked 301st in the OWGR.

His highest position was 74. He has one win on the DP World Tour, which came at the Spanish Open in 2016.

The last time he played was at the Portugal Masters in November. Here's to hoping he returns soon.