Collin Morikawa sets lofty 2022 goals: "How do I keep winning?"

Collin Morikawa has revealed his goals for 2022 and discusses how finishing "dead last" at the Scottish Open helped him triumph at Royal St George's. 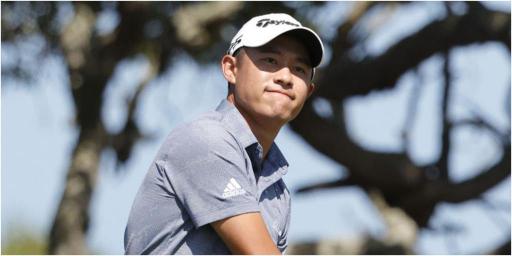 Collin Morikawa has revealed how finishing "nearly dead last" at the Scottish Open helped him win the Claret Jug.

Speaking to the media ahead of his first round on the DP World Tour at the HSBC Abu Dhabi Championsip, the young American set out his 2022 goals.

As you can no doubt imagine, there are lofty targets for the 24-year-old, who won won both of his major championships on his debut.

Of course, he wants to defend the Claret Jug at the 150th Open at St Andrews in July but he wants to continue to learn and improve. That's the main goal.

Before he won The Open at Royal St George's by two strokes over Jordan Spieth, Morikawa struggled at the Scottish Open at Renaissance Club.

In finishing 71st, few would have expected him to go on the charge and become the first player to capture two different majors on the first attempt.

Related: How much is Collin Morikawa worth?

"Even if you finish 20th or 30th for the week, maybe you've improved on something. Look at the Scottish Open, I finished nearly dead last but I learned something.

"I felt like it was a bad result but a lot of things went right for me to show up at The Open the week after and make some changes."

The reigning DP World Tour Number One gets his 2022 campaign started with a #ADGolfChamps | #RolexSeries pic.twitter.com/CLWSL8rDaG

Morikawa went on to explain that so long as he hits his own targets he doesn't care what people think. But knowing him, he'll want more, he said.

Now Morikawa is focused on "mini steps" to get the "big results". Few would bet against him having another stellar year.

On his first hole on the rebranded DP World Tour, Morikawa set the tone early with a typically well-struck iron shot.

Then he drained the birdie. Can you imagine what his career will look like when he finally retires?

"I've said it since day one, I want to be a world player and hopefully I've proved that and I just want to continue that," he said.

The answer to that, Collin, is probably just keep doing what you're doing.