LIV Golf's Sergio Garcia has been fined by the DP World Tour for not providing a medical reason for over his withdrawal from the BMW PGA Championship. 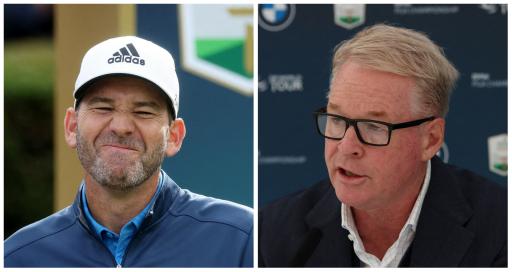 Sergio Garcia, who has joined the LIV Golf Tour, has officially been fined by the DP World Tour because he allegedly did not provide a medical reason for his withdrawal from their flagship event.

Garcia, 42, withdrew from the BMW PGA Championship in September after 18 holes having shot an opening round of 76.

That tournament was reduced to 54 holes following the death of Queen Elizabeth II. Garcia was later pictured with his wife Angela Akins Garcia 24 hours later pitch side at a University of Texas football game.

Related: Is LIV Golf about to introduce cuts and expand to 72 holes?

Per a report by Golf Digest's Ryan Herrington, an official from the DP World Tour has confirmed that Garcia has officially been fined by the former European Tour for failing to provide a medical explanation for his withdrawal.

Players are required to do this under the tour's General Regulations Handbook.

It is not known how much Garcia's fine is for or how he reacted, though Garcia has a history of outbursts.

Elsewhere, it appears that Garcia's days as an official member of the tour are numbered. He missed the deadline to commit to the forthcoming Mallorca Open, meaning that will not have played the minimum of four events so as to be eligible for Ryder Cup selection.

Garcia has a storied history with the Ryder Cup and is the record points holder for Team Europe.

Even if Garcia did play in the minimum number of events it remains to be seen whether LIV players who are DP World Tour members will be able to participate in the Ryder Cup anyway.

The DP World Tour is currently trying to prevent tour members who have teed it up or will tee it up in LIV Golf tournaments from competing in their events going forward.

This matter will be determined in February. A court date has been scheduled in the U.K.

Related: Brooks Koepka has nothing but contempt for Bubba's banter

Garcia has played in just three DP World Tour events in 2022. Those being the Dubai Desert Classic, the BMW International Open in Germany and Wentworth.

The Spaniard will be in the field at LIV Golf Jeddah this week. This is the penultimate event of LIV's inaugural season before the $50m Tour Championship at Trump Doral in Miami.