A report has surfaced suggesting the LIV Golf is ready to introduce a cut to their events and compete over 72 holes starting in Jeddah. 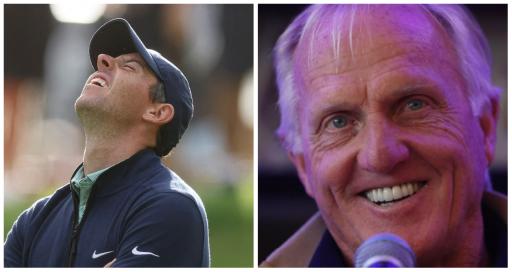 The LIV Golf Tour is reportedly in advanced talks to start adding cuts to their events and expanding to 72 holes, beginning with the penultimate tournament of their inaugural season in Saudi Arabia.

According to golf reporter Hugo Costa, LIV Golf are keen on implementing a cut element for their forthcoming tournament in Jeddah at Royal Greens Golf & Country Club which is scheduled to be played over October 14-16.

Per Costa's report, players on the LIV Golf Invitational Series have been discussing about moving to 72 holes since their third $25m tournament in Bedminster in July, which was memorably won by Henrik Stenson after he was sacked as the captain of Ryder Cup Europe.

LIV Golf chief executive Greg Norman previously insisted he had no plans on changing their format.

However, the fact that LIV plays its events with fields limited to 48 players on a primarily invite-only basis without a cut, it means they are unlikely to gain accreditation from the Official World Golf Ranking [OWGR].

At present their players - unless exempt - are unable to qualify for golf's four major championships via their traditional routes of playing on the PGA Tour.

The alternatives for LIV signees to gain world ranking points include taking part in Asian Tour events. The International Series on the Asian Tour, in particular, is bankrolled by the same group of people financing LIV.

Patrick Reed and Talor Gooch are just two players who have done this in an apparent attempt to stay within the top 50 of the OWGR.

The PGA Tour has indefinitely suspended current and former members who participated in LIV Golf tournaments pending the outcome of an antitrust lawsuit.

#LIVGolf is in advanced discussions about adding a cut to the Jeddah Invitational, and I believe it will be implemented.

This is a major hurdle for world ranking points and would likely be enough for them to be awarded.

.@hugocostagolf confirms what we have heard from sources inside LIV. Players have been discussing moving to 72 holes and adding a cut since Bedminster, and it's appears that they will move forward with some of these adaptations.

DeChambeau, in particular, hit out by saying that they were "delaying the inevitable".

"We've hit every mark in their criteria," said DeChambeau, who is now the No. 49 in the OWGR.

"So for us not to get points is kind of crazy with having the top - at least I believe we have the top - players in the world. Not all of them but we certainly believe that there's enough that are in the top 50, and we deserve to be getting world ranking points."

His reaction followed the news of LIV Golf striking a "strategic alliance" with the little-known MENA Tour.

All LIV Golf players joined the MENA Tour as part of the agreement.

That deal gave LIV the confidence that their players could start earning world ranking points in their last event in Bangkok which was won by the young Spaniard Eugenio Lopez-Chacarra.

Such confidence was short-lived as the governing body said they would "review" the changes.

Then MENA Tour commissioner, David Spencer, hit out at the decision. Likewise Norman, who told the OWGR to "grow up".